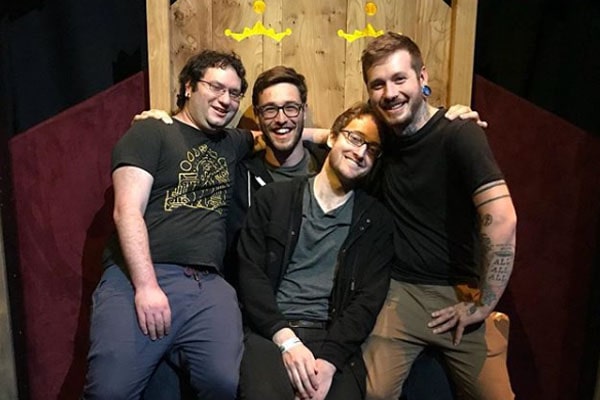 With the increasing popularity of YouTube in our daily life, we can learn almost everything from Youtube videos. Likewise, many genres of videos are released every single day on the platform. Virtual Reality is a large part of our life where video games have become one of the top tiers forms of entertainment. Amongst the crowd of creators, Treesicle has created its brand and prestige. Treesicle is a gaming channel for consciousness-expanding videos on your favorite gaming topics.

With over 954K subscribers and counting, Treesicle is growing steadily. Let’s know more about the members who make content for this fun-filled gaming YouTube channel.

The YouTube Channel ‘Treesicle’  has four members as their whole writing and producing team. They are a four men army on the battlefield of the gaming zone. The four members of ‘Treesicle‘ are Tyler Baron, Ryan Kroner, Grant Ball, and Mike Pixley.

Tyler Baron is one of the member and co-founder of Treesicle. He is very active on Twitter and Twitch where he shares his thoughts and humor with other games geeks. According to his Twitter description, he claims to be very knowledgeable about beer. Apart from Treesicle, Tyler has his own YouTube channel ‘Zarbidar Dongalong,’ which he started on Dec 27, 2016, and has uploaded only a video to date.

Tyler updates on Twitter often and we came to know that Tyler has adopted a cute cat, Bean! Even though Tyler Baron is a professional YouTuber and seems to be doing great, he still doesn’t prefer social media at all. The co-founder of Treesicle seems to keep his private life away from the camera, maybe that is why we haven’t been able to see much of his family members and his girlfriend.

Ryan Kroner is a 6 ft 8-inch tall gamer who surely does catch attention. He is also the voice actor behind the videos posted on Treesicle. The tall, handsome man also has his own YouTube channel ‘Kronsauce‘ and has twenty-three videos displayed as of January 2020.

When the popular thread of “five things people don’t know about you” got tagged to Ryan, the fangirls or even fanboys came to know different things about him.

1) I have TMJ. My jaw used to lock open as a kid
2) I brew beer and cider
3) I once woke up in just my underwear in a hotel hallway
4) Sweet Potatoes are disgusting
5) I have a fat scar on my face from a wisdom teeth extraction gone wrong, but it’s hidden by the beard https://t.co/46nSyNPOU6

Also, Ryan is very close with his family members as he spends a lot of time with them and shares cute snaps on his Instagram. Well, Ryan is just a softball in the huge body frame.

Grant Ball is the one who is behind the voice of the theory videos posted on the Treesicle’s YouTube channel. He is also the writer and editor for Treesicle. He also has his own YouTube channel ‘Grant Ball‘ and gathered around 7,236 views on his single video that is available.

Mike Pixley is the writer, producer, and video editor of the contents produced under the moniker Treesicle. Like other members, he also has his YouTube channel apart from Treesicle. The YouTube channel he owns with his girlfriend is called ‘Death Mountaineers.’ Even looking at his Instagram feed, we can see that Mike is a tattoo enthusiastic with beautiful art carved in his body.

The members of Treesicle are very close to each other as they travel together, and the contents they create are entertaining to watch too. The passion they have for the creation has been making them more and more close to each other.

Some facts about the Treesicle

We hope to keep on being able to sharpen our minds on the game theories with the help of Treesicle!