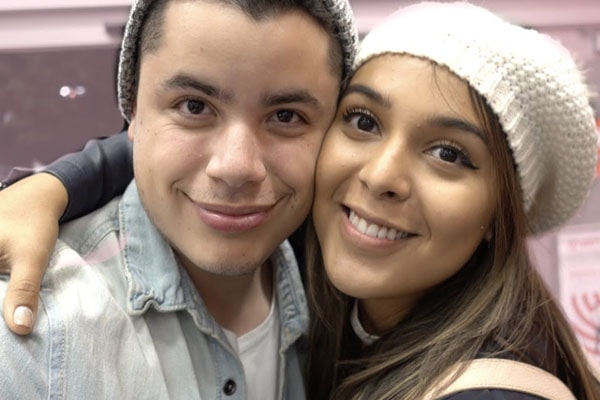 The American YouTuber Natalie Alzate aka Natalie Outlet is married to her longtime boyfriend Dennis aka HeyItsDennis. The pair got married after being in a relationship for 6 years.

Natalie Alzate is an American YouTuber who is known for her YouTube Channel “Natalies Outlet”. Her channel has over 7.9 million as of September 2019. Beautiful Natalie is a very popular media star and also she is popular for her DIY videos, and life hacks.

As for her husband, Dennis is also a YouTuber and has a channel named Hey_itsDennis. The pair also has a combined channel named  ‘Natalie and Dennis show’ which has over 560k subscribers as of September 2019.

It looks like Natalie and her husband are meant to be together, as they are not shy about expressing themselves. They are often seen posting the photos on Instagram of them traveling together and at times showing some PDA as well.  With just by the photos, we can see how much of time they spend together.

The pair, who have been dating since 2013, got engaged during a trip. Natalie’s partner Dennis made Origami hearts to his wife as a symbol for their love. Also, Dennis proposed his wife getting down on one knee with a simple pear-shaped diamond ring.

The Pair Has Been Married Since 2017

In November 2017, the gorgeous Natalie and her husband Dennis got married after dating each other for 6 years. Likewise, the married couple posted the videos on their specious day on their channel. The duo was perfectly dressed and were a perfect match for one another.

Their family members and some closest friends were on the guest list. And looking at their wedding video, we can see how much fun they had.

Natalie and her hubby Dennis are a couple that has gone through a lot together and still are staying strong together. As the duo has been together for so long now, who knows that they could be even planning of having a baby soon.