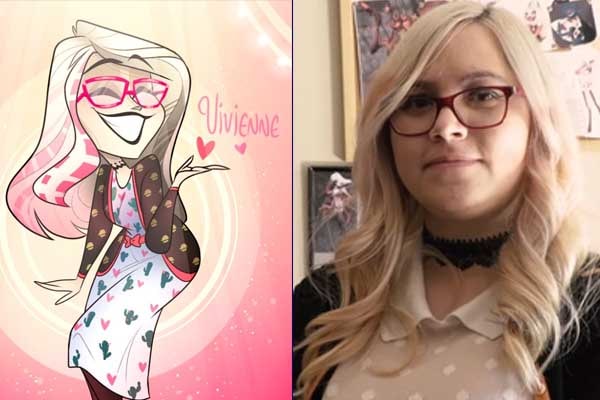 Vivienne Medrano aka Vivziepop is an independent animator and cartoon maker, who earns a handsome amount of money from her YouTube channel and merchandise. Image Source: Pinterest.

Widely known as VivziePop, Vivienne Medrano is the one behind the success of the YouTube channel VivziePop. She joined the YouTube community on September 8, 2012, and with 200+ videos under her name, she has become quite famous. She is also the founder of SpindleHorse, a production company.

Vivienne graduated with a traditional animation as her major from the School of Visual Arts in New York City. She is best known for works on Holidaze, Hazbin Hotel, and Helluva Boss. Well, her short animated stories are quite famous among her fans. She has been able to make a hefty load of cash from her YouTube channel that has only added to her fortune. So, let’s see through some of her sources of earnings and try to find out VivziePop’s net worth.

As mentioned above, Vivienne has already uploaded more than two hundred videos on her YouTube channel. And with three million-plus people subscribed to her channel, it comes as no surprise that she earns a handsome amount of money from her videos. According to SocialBlade, Vivienne makes an estimated amount of  $2.7K to $42.9K a month and $32.1K to $514.2K a year.

Plus, on average, she earns from $89 to $1.4K a day, whereas $625 to $10K a week. Speaking of her most viewed videos, Die Young fan animated music video tops the chart with more than 52 million-plus views worldwide. Seeing those numbers, we can definitely say Vivienne Medrano’s net worth must be in thousands of dollars or even more than that.

VivziePop has a solid fan base, everyone knows that, and with such a fan base, it’s really important to connect with them. That’s when merchandise step-in. Like every popular YouTuber, VivziePop has her own line of merchandise that you can buy on the official page of Sharkrobot. They sell Hoodies, Long Sleeve Shirts, and their masterpiece their animated stickers.

Speaking of the price range of the merchandise, it lies somewhere from $9.95 to $40. You can check out the table below for more information on VivziePop’s merchandise.

Apart from that, Vivienne has also created Patreon membership so that her fans could support her in creating Hazbin Hotel and other cartoons. Her membership ranges from $1 to $ 10. To be specific, she has three membership available on the official page of Patreon, Thanks n Public Works, PEEKS!, and OMG IT MOVES!. So, if you are a fan and would like to support her channel, you can buy a membership on the Patreon.

Vivienne Medrano, aka Vivziepop, is an independent animator and cartoon maker. She loves to laugh and make other people smile. She is also a cat person and owns two cats. Her most popular animated series is the Hazbin Hotel. It is a story revolving around the daughter of Lucifer. She opens a rehabilitation hotel that offers a group of misfit demons a chance at redemption.

Vivienne’s Hazbin Hotel was also released on the local theater, and it did a rather stunning job. She must have got a fair amount of money from its release too. Getting back to Vivziepop’s net worth, it includes all of the earnings from her YouTube channel, merchandise, and Patreon. She is currently working on another project, which we are sure would do wonders and will further add to her wealth.