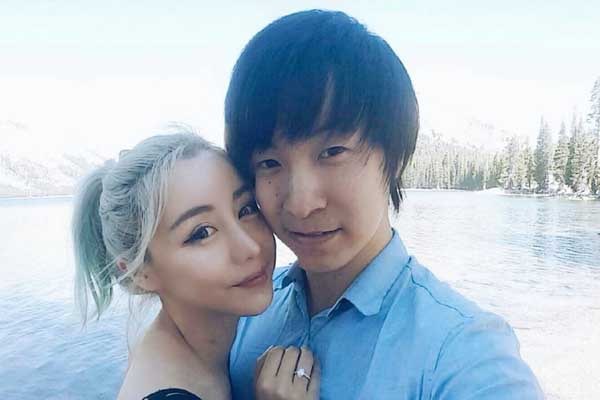 Wengie and Max are one of the most adorable YouTubers out there. Image Source: Wengie's Instagram.

Speaking of her love life, Wenjie is currently engaged to Maxmello or only Max. The couple first met in 2000, at the Year 10 Ball of their high school. However, they never had a thing going on until they met again in 2010. Their companionship soon developed in to love as Max proposed her in 2015. So, let’s know more about the fiancee of the YouTube sensation Wengie.

Like his fiancee Wengie, Max is also a YouTuber. He currently hosts a YouTube channel named ReactiCorns. He joined the YouTube community on June 19, 2016. Max has become a YouTube sensation, with over 2.25 million people subscribing to his channel. And with more than 5.14 million views on his YouTube channel, we can only imagine Maxmello’s net worth to be of thousands of dollars.

In addition to that, according to SocialBlade, Max earns about $1.7K to $26.6K a month and $19.9K to $318.7K a year. Moving on to his channel, Max primarily focuses on reaction videos. He has uploaded nearly a thousand videos on his YouTube channel. Max’s fiancee sometimes accompanies him in his reaction videos, and the duo just looks adorable together.

Is A Cat Person

It’s no surprise that Wengie’s soon to be husband is a cat person as she herself adores cats. In fact, her beloved Boomba has been featured numerous times on her YouTube channel. That said, Wengie’s fiancee owns two cats, Mia and Mello. Max just loves his two cats, he loves feeding them and petting them. No wonder why Wengie is dating him. The pair has so many things in common.

Furthermore, Max’s Instagram is filled with his cat’s pictures, we can definitely say he is a cat person. Apart from that, let’s get to know more about Max and his partner’s relationship.

How Is Max And Wengie’s Relationship?

To put it more simply, Max and Wengie are one of the best YouTube couples out there. They have been together for a long time and have been through thick and thins together. It’s no surprise they share such majestic chemistry. The pair just enjoys each other’s company. We can tell they share a strong bond only by seeing their videos together.

Wengie first announced that she was engaged on August 23, 2015, with a picture with her fiancee. Her fans were extremely happy for the couple, and now, since it’s been nearly five years the couple has been engaged to one another, the next big step in their relationship seems to be their marriage. However, the couple is unsure when they are going to exchange their vows. Wengie says they are quite busy with their life and whatever they have going on is just perfect for them.