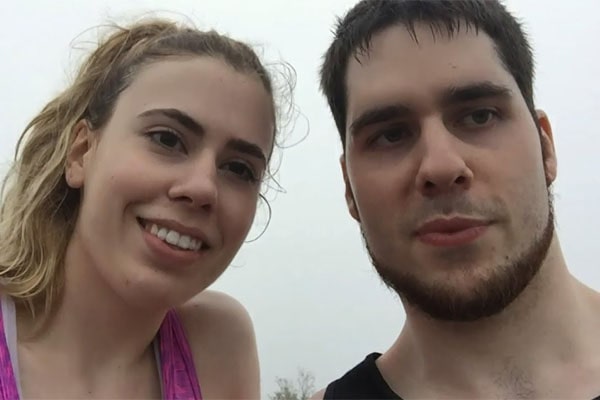 The ex-couple, Jennifer Flagg and Patrick Brown divorced each other in 2019. Image Source: YouTube.

GamingwithJen is a popular YouTube personality, who is famous for uploading Minecraft videos along with Pat. Pat is also a gamer and has a YouTube channel called PopularMMOs. She started her YouTube channel playing adventure maps with PopularMMOs and uploads vlogs, challenges, with her ex-spouse.

The pair dated for a couple of years before getting engaged to one another. After a year, the couple finally married each other in 2015. The pair confirmed their marriage by uploading a video titled, “We Got Married.” However, they uploaded another video on May 26, 2019, titled We are breaking up, which shocked all of their fans. So, let’s get to know more about that.

The YouTuber pair Jennifer Flagg and Patrick Brown announced their split after four years of marriage. Later in March of 2019, both of them got a divorce claiming that they both deserve to be happy and also announcing they will continue to record together and find other people in their lives.

PopularMMOs Patrick Brown stated that he and his ex-wife, Jen will no longer live together. Their sudden split seemed to have taken their fans by surprise. PopularMMOs shocked fans by publicly announcing their divorce and also requesting respect and privacy during this tough time.

Speaking of how the ex-couple actually met, they met each other in high school when they both volunteered for their local Humane Society. GamingWithJen, aka Jennifer Flagg, created PopularMMOs’ website for Pat when he first started his YouTube channel on April 17, 2012.

She taught herself to code in order to make the website for Pat. Then, Jen moved onto ‘World of Warcraft,’ and she also played a game called ‘Miss Bimbo’. She finally joined the YouTube community on November 27, 2012.

Reason Behind the Breakup

On May 25th, 2019, the ex-pair decided to separate for different reasons. Pat has uploaded a 12 min video on his YouTube channel where they confirmed their divorce. In the video, the ex-pair stated about not having kids.

It looks like they are both taking a step back regarding their relationship. And will continue to be good friends. It could be that both GamingWithJen and her ex-husband PopularMMOs are taking their time and staying single for a while.

Maybe they just want some time for themselves or to figure things out in life. Let’s hope everything works out between the ex-pair, whether they remain separated or decide to patch up again.

Nevertheless, after all the incident, YouTuber Jen is seen traveling different places likewise PopularMMOs, Pat is busy in making his body fit. He uploads tons of workout pictures and videos on his Instagram.

Well, it’s interesting to know that the ex-couple is happy right now and are good friends with each other. The two often show up at one another’s YouTube videos too. As for their love life, they have been super low-key about it. But in one of Patrick’s YouTube videos, Jennifer said that she was dating someone. She probably wants her love affairs to be a secret.

On the other hand, Patrick seems to be single at the moment. However, he made a prank video with his friend, Elein. The title of the video was “I Asked Her To Marry Me!” The fans were shocked for a minute. They even thought Patrick and Elein were in love. So, they dm’ ed Elein with hatred messages, comparing her to Jen.

So, Patrick was very upset about that. He also made a video about this and told his fans to stop. Nevertheless, Patrick seems to be single and is perhaps waiting for the right person to enter his life.