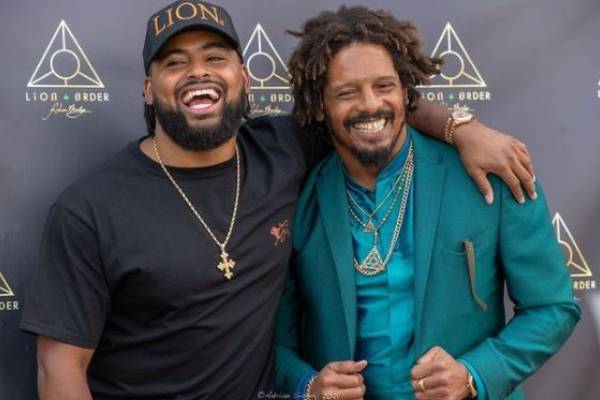 Rohan Marley came into the limelight for his successful business ventures and football career. Not only that, but he is also recognized as the son of reggae artist Bob Marley. Talking about Rohan Marley’s personal life, he is a doting father of eight kids.

Seven of Rohan Marley’s kids have already grown up, and his youngest daughter is three years old as of 2021. Rohan shares his two eldest kids with his first wife, Geraldine Khawly. His son is a former football player like him. Other than that, there’s more to learn about him.

So, why not we learn some interesting facts about Rohan Marley’s son, Nico Marley?

Second Kid Of Rohan With Geraldine

As mentioned earlier, Rohan Marley, the son of reggae legend Bob Marley, has two kids with his first wife, Geraldine Khawly. The parents of two met while they were students at high school and were married for three years, from 1993 to 1996.

Nico Marley, born Nicolas Rohan Marley, is the second kid of Rohan and Geraldine, who was born on January 5, 1995. Before him, they had welcomed their daughter Eden Marley in January 1994. Nico and his elder sister have a great relationship, and they often share adorable pictures of them on their social media pages.

Rohan Marley’s son, Nico Marley, attended Cypress Bay High School and played football for the school. 247Sports.com rated him as a three-star recruit, and he even garnered two-star status from Scout.com, Rivals.com, and ESPN.com.

Furthermore, Nico received a District 11-6A title as a high school sophomore. Then, he got the opportunity for three trips to the state playoffs during his senior year. He posted one interception and 67 tackles during his senior days, which helped him become a first-team all-state. Moreover, in June 2012, Nico was named linebacker MVP of the Al Golden Summer Camp.

Nico had a successful high school football career, and upon graduating, he went on to attend Tulane University in 2013. He continued his football journey at the college and was an integral part of the Tulane Green Wave football team.

Rohan Marley’s kid played in all 13 games with 12 starts at a weak-side linebacker as a freshman. He earned several titles and awards, including Conference USA Co-Freshman of the Year and a spot on the C-USA All-Freshman Team.  As a sophomore, Nico began all 12 games and went on to claim different honors and awards.

Like his two other years, Nico also had a successful junior year, claiming All-American Athletic Conference First team honors. Rohan’s baby boy started all 12 games during his senior year and earned 2016 All-American Athletic Conference first-team recognition. This was his second time earning the titles. Moreover, he was named to the All-Louisiana College Football Teams for the second consecutive year.

Overall, Nico’s high school and collegiate career were successful as he was able to bag many titles and awards.

As stated above, Nico Marley attended Tulane University from 2013 to 2017. Bob Marley’s grandson graduated in 2017 with a Bachelor’s degree in Business, Management, Marketing, and Related Support Services.

In May 2017, the Washington Redskins signed Nico following a tryout at Washinton’s 2017 rookie minicamp. He announced the great news via an Instagram post. Family and friends flooded his comment section with the congratulations note and wished him the best of luck for his future endeavors.

Moreover, shortly after the 2017 NFL draft, he had joined the team and received an official contract after a few days. However, Nico’s luck ran out, and sadly, he did not get to enjoy a fully-fledged professional career.

Four months after the Redskins signed him, he was waived from the team. The NFL team released him and several other players, including Brandon Banks, Robert Davis, Kenny Hilliard, and Matt Hazel. Sadly, Nico did not get to showcase his skills in the NFL.

Started His Own Business

As mentioned earlier, the Washington Redskins waived Nico in September 2017. Then, in March 2019, he and his dad, Rohan, went to Jamaica, and there they taught about American football.

The brand represents the holistic and balanced approach to modern wellness for those thriving for their best life. The products of Lion X CBD are organic, vegan, and ethically grown. In an interview, Nico mentioned that his brand brought together top-quality products, entrepreneurship, athleticism, and the Marley heritage.

The brand has several products, including CBD oils, CBD Gummies, CBD Soothing Gels, and other products. Many people seemed to have loved the products, and his business is doing well. And we hope that Nico’s business continues to flourish in the coming days.

Is A Big Brother To Seven Half-Siblings

Then, Nico’s dad got married to Barbara Fialho, with whom he has a daughter, Maria Cedella Marley. Similarly, Nico’s mom, too, remarried and gave birth to this half-brother, Stephan Lobey.

Rohan Marley’s son, Nico Marley, has a great relationship with all his half-siblings. Furthermore, the siblings often hang out and celebrate different family functions. As an elder brother, Nico looks after all his younger siblings and supports them in their various works. He also posts photos of his siblings and wishes them on their birthday with sweet messages.

Moreover, going through his Instagram, we can see that Nicolas is living a comfortable lifestyle. He often travels to several places and countries. However, there is no mention of Nico Marley’s girlfriend on his social media sites. It might be because he has not found the perfect girl yet or maybe he wants to keep that portion of his life private.

Whatever might be the reason, we hope that Nico Marley continues to live the best life and finds even more success in the coming days.

The name Nico is the short form of the Greek name Nicolas, which means Victory Of The People.