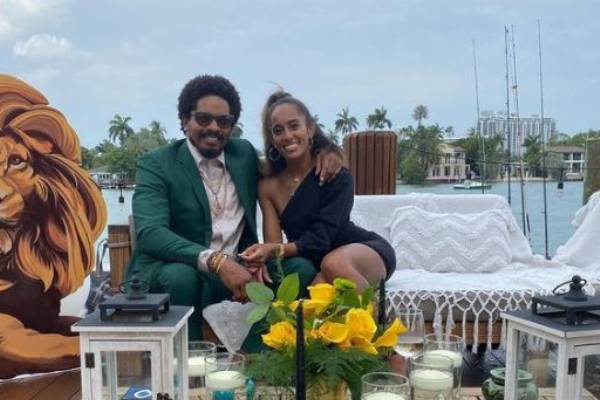 Rohan Marley, born Rohan Anthony Marley, is one of eleven children of reggae artist Bob Marley. He is a former football player and an entrepreneur who founded an organic coffee plantation and “sustainable” farming business in Jamaica’s Blue Mountains, Marley Coffee.

Furthermore, the former football player is the doting father of eight kids whom he welcomed with his various partners. Most of his kids are all grown up and are doing great in their life. His two eldest kids, a son and a daughter are the ones he welcomed with his first wife, Geraldine Khawly.

Among those two kids, in this article, let’s learn in detail about Rohan Marley’s daughter and see what she is doing now.

Eden Marley also has a younger brother, Nico Marley, who was born on January 5, 1995. She and her brother, Nico, born Nicolas Rohan Marley, are really close with each other and must have had a great time growing up together.

Sadly, a year after her brother’s birth. Eden’s parents separated. Nonetheless, her dad and mom seem to have maintained a good relationship.

Eden Marley is a law school graduate. In August 2017, she started her law school at the Maurice A. Deane School of Law at Hofstra University. She was awarded the Dwight L. Greene Memorial Scholarship after she demonstrated a commitment to advocacy on behalf of minority groups. Three years later, in May 2020, she graduated from the school.

Furthermore, Rohan and other Marley family members congratulated Eden through their respective Instagram accounts. And with her achievements, her younger siblings might look up to her and get inspired to succeed academically.

Is The Founder Of A Non-Profit Organization

A year before joining the law school, Rohan Marley’s daughter founded a non-profit organization, The Garden of Eden Foundation. It is established with a mission to empower youth and women by cultivating self-worth and self-esteem through education, arts, and sustainable community projects.

By providing the arts, mentorship, and education programs in underserved societies or communities, the foundation has a goal to empower and motivate youth and women to reach their full potential. Furthermore, this organization operates domestically as well as globally.

Eden Marley’s foundation offers several programs like the Women’s Empowerment Project: Haiti. Rohan’s baby girl often travels to several places or countries for various projects, and her foundation has helped many people over the years.

Is A Loving Wife And A Doting Mother Of One

Rohan Marley’s daughter, Eden Marley, seems to be doing great professionally and the same can be said about her personal life. Eden is happily married and is the doting mother of a kid. According to The Knot, Eden and her boyfriend, Olivier Vernon, set their marriage date on April 30, 2021.

However, Eden’s dad, Rohan, uploaded an Instagram post on April 16, 2021, and shared the news of her marriage. Moreover, the lovely bride and other family members revealed the news of her wedding by sharing pictures of her reception held in May 2021.

Four months later, in September 2021, Eden and her husband, Olivier, welcomed a daughter whom they named Ocean Vernon. She and her husband shared the news of the baby’s arrival via Instagram posts.

Rohan is undoubtedly proud of his daughter Eden and often uploads pictures of her and gush about her work and achievements. Nevertheless, we hope Rohan Marley’s baby girl continues to do good works and achieves more success in the days to come.

The name Eden has a Hebrew origin, and it means Paradise.