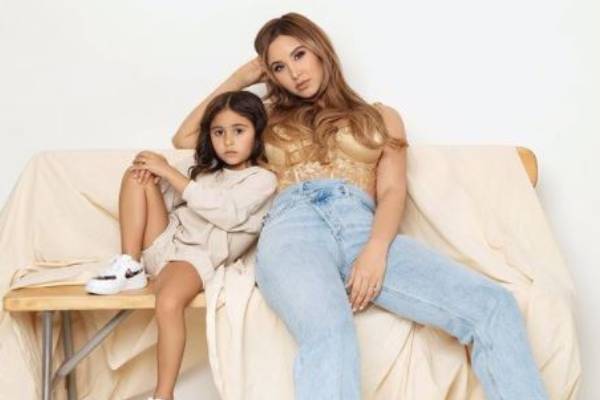 YouTube is not only a platform for uploading different videos, but it has also become a business for many people. Many people, including celebrities, business people, and entrepreneurs, have made good use of this platform for themselves. With the millions of views that a good video can get, one can earn money and fame from YouTube.

One such name that became popular because of YouTube is Catherine McBroom, also known as Catherine Paiz. She is well-known for her YouTube channel, The ACE Family, which she runs with her husband. The channel with millions of followers has made not only Catherine and her spouse famous but also her children.

In this article, let’s learn in detail about Catherine Paiz’s daughter, Elle Lively McBroom, and how she is growing up.

First Born Of Her Parents

Catherine Paiz shares a blissful marital life with Austin Mckinley McBroom, The ACE Family patriarch. The couple met in 2015 and got married in 2017 in their backyard, secretly. But before marriage, they had already started their family by welcoming their first child.

In December 2015, Catherine Paiz’s partner, Austin, posted a photo on his Instagram page, where he was seen kissing her pregnant belly. Austin wrote in the caption that he is now a father and further promised to their soon-to-be baby to be the best daddy. Moreover, he also thanked Catherine for carrying their baby.

Similarly, Catherine also posted a picture of her baby bump and revealed that she and Austin were expecting a baby girl. Afterward, she kept on updating her followers about her pregnancy through her Instagram page.

As mentioned earlier, Elle Lively McBroom is Catherine Paiz’s eldest daughter with Austin McBroom. She has two younger siblings, a sister, and a brother. In February 2018, Elle’s parents shared the news about them expecting their second child.

In April, her dad and mom revealed that they were expecting a baby girl. Finally, on October 17, 2018, Elle McBroom‘s baby sister, Alaia Marie McBroom, was born. Her parents shared the news of the birth of their second daughter on Instagram.

Elle Lively McBroom’s Instagram, which is handled by her parents, also shared a sweet post about her sister’s arrival. In the caption, she promised to be the best big sister.

Two years after the birth of her younger sister, Elle Lively McBroom’s brother Steel McBroom was born on June 20, 2020. However, unlike the previous pregnancies, the McBroom family kept the third pregnancy a secret and revealed it only after a few months.

Catherine Paiz’s daughter, Elle, loves both of her siblings, and they all seem to be having a wonderful time growing up together.

As mentioned earlier, Catherine Paiz and her husband are YouTubers and social media personalities. They have earned massive fame from their channel and their content. Just like her parents, Elle, too, seems to be camera-friendly. She began appearing on her parents’ YouTube channel at a young age.

Furthermore, Catherine Paiz’s daughter, Elle, also makes TikTok videos with her parents and siblings and shares it on The ACE Family TikTok account. Seeing her parents making content and filming several videos might have developed Elle’s interest in the social media world.

Moreover, Elle seems to love dressing up. Her parents often post several pictures of her in fashionable clothes. Moreover, her official Instagram account already has 4.5 million followers. Who knows, one day, Elle might try her luck in the fashion industry or possibly become a reputed social media personality and YouTuber.

As of 2021, Catherine’s baby girl is five years old. In an Instagram post from September 2021, the little one can be seen wearing a school dress. The caption stated that it was the first day of school for Elle. However, which school she currently attends has not been revealed.

In March 2019, a fan had asked her mother if she and her husband intended to make Elle and Alaia homeschooled or will they send their daughters to public school. She had replied that it was the toughest decision in their family as both kids and teachers are not safe to go to school. Two years later, she and her husband seemed to have made a decision by sending their oldest child to school.

Catherine and Austin’s baby girl must be doing really well. Elle, whose parents describe her as the goofiest child, seems kind. Nevertheless, we hope that she has a successful life ahead.