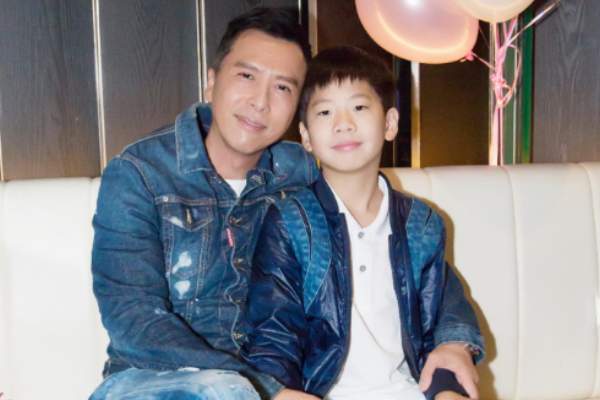 Donnie Yen was born in China’s Guangzhou. His father, Kylster Yen, was a newspaper editor and an amateur pianist, and his mother, Bow-sim Mark, was a master of kung fu. Donnie’s parents first relocated to Hong Kong when he was two years old before moving to Boston, Massachusetts, when he was eleven.

Donnie Yen is married twice and has three children. One from his ex-spouse and two from his present wife, Cissy Wang. In this article, we will learn about Donnie Yen’s son, James Yen. So follow along if you want to know more about the little boy.

Is The Only Son of Cissy Wang

Unlike Donnie Yen, Cissy Wang has only two children who are Jasmine Yen and James Yen. Hence, making James Wang the only son of Cissy Wang. The couple welcomed him in December 2007. Three years earlier, in January, James’ sister was born. In addition, he also has a half-brother, Man-Zeok Yen, aka Jeff Yen, whom his dad, Donnie, welcomed with Zing-Ci Leung.

The Yen siblings must have a fabulous bond. It must have been fun growing up together. As they say, the apple doesn’t fall far from the tree, has Donnie Yen’s son gotten any interest in acting? Or he has another interest?

Did you know that Donnie, a Hong Kong action star famed for his smooth martial arts moves, is also a skilled classical pianist? In fact, the action star, who reportedly holds Grade 8 certification in piano, has collaborated with world-famous pianist Lang Lang to perform for Chinese President Xi Jinping. And It is no wonder that Donnie Yen’s son is into the piano.

In July 2021, Donnie posted a video of his then 13-year-old son James performing the Pirates of the Caribbean theme song, “He’s a Pirate,” on Instagram. The delighted father could be seen in the video observing James playing the piano with great concentration. As soon as Donnie Yen’s son reached the final note, he rushed to hug him.

Writing in the caption, James Yen’s dad exclaimed that he was proud of him and asked to thank his mom for all her efforts and energy. James Yen’s sister has a good singing talent. For instance, on 2021 Father’s Day, James played the piano while his sister played guitar, and they sang and wished him.

So, is Donnie Yen’s baby boy planning to go professional in the coming days? It’ll be fun to watch, nonetheless.

James, A Package Full Of Talents

Going through his Instagram, we can see that James has uploaded several videos and photos of him playing piano. However, being a fantastic pianist is not the only talent that Donnie Yen’s son has been blessed with. He is very interested in other activities, such as painting, swimming, and surfing.

While James Yen’s dad has said he won’t make any more martial arts movies after Ip Man 4: The Finale, it seems like James is preparing to fill in his shows. Donnie Yen’s son already has a black belt in karate. In fact, his mother shared several pictures of him in his karate class and wrote, “Like father like son.” With all these talents, it is no wonder that Donnie’s kid is a package full of talents.

Overall, James Yen seems to be living a good and comfortable life. We wish him the best for the unseen future and hope he reveals more about his personal as well as professional life ahead.

James is a Hebrew name that means “supplanter.”