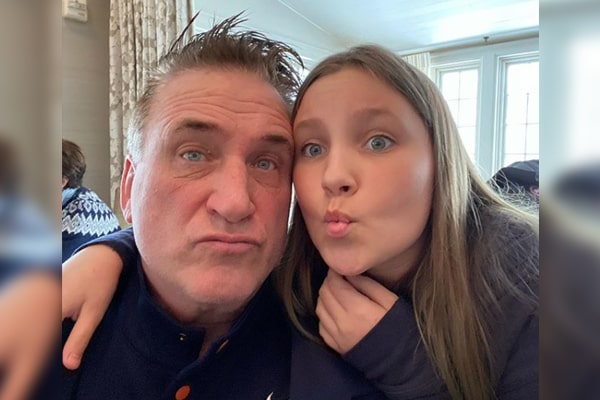 Baldwin brothers are famous for their looks and their extensive career in the entertainment industry. Today, we will be talking about the second eldest amongst the four, i.e., Daniel Baldwin.

Starting his career since 1988, Daniel Baldwin was married a few times. Although the marriages failed, he is a proud father of five. So, for now, we will be talking about Daniel Baldwin’s daughter with ex-wife, Joanne Smith, Finley Rae Martineau Baldwin, in this article.

Baldwin’s ex-partner welcomed her second child at Cedars-Sinai Medical Center in Los Angeles. According to People, she weighed in at 7lbs, 10 oz, and almost 20 and a half inches long during the time of her birth.

The former British model, Joanne, and Homicide: Life on the Street star, Daniel announced the pregnancy and sex of the baby in April of that year. Although she is quite young, Daniel shows her off occasionally via his Instagram.

Finley’s father shares a lot of throwback pictures and likes to remind everyone that his daughter is the love of his life. Baldwin’s daughter, Finley, and Avis frequently appears on Daniel’s Instagram.

Furthermore, Finley is young and has a lot to experience in life. Although children grow at a rapid speed, let’s hope Daniel Baldwin’s kid flourishes beautifully.

Aforementioned, Daniel Baldwin is a father of five. He has been married a couple of times, which unfortunately failed. Amongst five children, Joanne and Baldwin’s daughter, Finley Rae Martineau Baldwin, is the youngest.

Finley’s parents, Joanne and Daniel previously welcomed their first daughter, Avis Ann Baldwin on January 17, 2008, at Cedars-Sinai Medical Center in LA. Avis was Baldwin’s fourth child and Joanne’s first. The former couple was beyond excited to welcome their first child, and Baldwin was happier that their daughter looked more like Joanne.

Finley is rich in terms of siblings. Her father, Daniel Baldwin, had fathered three more children from his previous marriages. Daniel Baldwin welcomed his first daughter, Kahlea Baldwin, in 1985 with his first partner, Cheryl Baldwin.

As of now, Daniel Baldwin is engaged to be married to an entrepreneur, Robin Sue Hertz Hempel, since November 2014.

Finley Rae Martineau Baldwin’s parents had an exciting meeting. The pair met in an exclusive drug and alcohol rehab facility in Malibu. Daniel Baldwin’s ex-wife, Joanne worked as a chef at the facility.

The pair married on July 28, 2007. However, their marriages had a fair number of ups and downs during their relationship. In an account, Baldwin’s ex-spouse was arrested after she violated her probation by driving under the influence. Following her arrest, Joanne Smith was sentenced to ten days in jail. Furthermore, Finley’s father filed for divorce the same day as Joanne’s arrest and filed a temporary restraining order against her.

However, the ex-pair reconciled and dismissed the restraining order as well. Regrettably, things did not end well with the couple and ex-model, Joanne filed for divorce again in 2012. Their divorce finalized in 2016, and Daniel is now engaged to partner, Robin, since 2014.

The name Finley is of Scottish origin, which means fair warrior. Likewise, Rae is of Hebrew origin which means ewe and Martineau are of Roman origin which derives from ‘Mars’, the god of fertility and war.