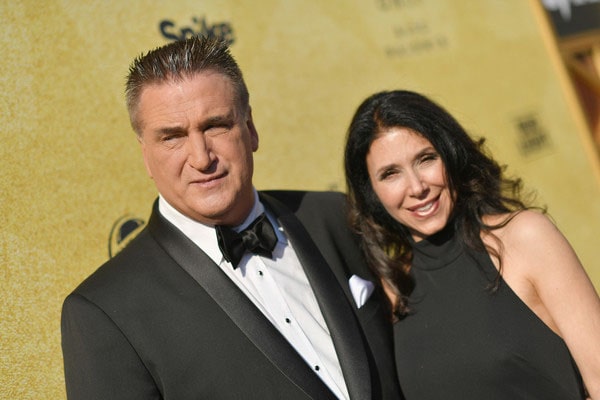 The ex-couple, Daniel Baldwin and his ex-wife, Joanne Smith-Baldwin divorced each other in 2016. Image Source: Zimbio.

The American actor and producer, Daniel Baldwin, married his now ex-wife, Joanne Smith-Baldwin, in 2007. The ex-couple even had two beautiful daughters named Finley Rae Martineau Baldwin and Avis Ann Baldwin. But Daniel and Joanne divorced each other after nine years of marriage in 2016.

Talking about Daniel Baldwin’s ex-wife, Joanne, she is a former British model. Before Daniel married Joanne, he was in a marital relationship with his two ex-wives; Cheryl Baldwin and Elizabeth Baldwin. Well, as we discuss Joanne and Daniel’s divorce, some of you may be unaware of what the reason behind their divorce was and where is Joanne Smith at the moment.

So, let’s not waste any time and get straight down to know more about Daniel Baldwin’s ex-wife, Joanne Smith-Baldwin.

Reason Behind Joanne Smith And Her Ex-Husband, Daniel Baldwin’s Divorce

Well, as stated above, the ex-couple, Joanne and Daniel tied the marriage knot in 2007. They also became parents to their two daughters, Finley Rae and Avis Ann.

Before he married Joanne, he was in a married relationship with his ex-wives, Cheryl Baldwin and Elizabeth Baldwin. He had his daughter, Kahlea Baldwin, with Cheryl and Alexandra Baldwin with Elizabeth.

Well, in 2011, Joanne was arrested after she violated her probation by driving under the influence. She also had threatened to kill Daniel with a knife, so Daniel had called the police.

Following her arrest, she was sentenced to ten days in jail. Daniel filed for a divorce the same day his ex-wife was arrested. He also filed a temporary restraining order against her as he feared for the safety of his two daughters.

But later on, Daniel Baldwin reconciled with his ex-wife. He went to court and asked the judge to dismiss the restraining order as well. Things were going well between the two until Joanne filed for divorce again in 2012.

Finally, the two ex-coupe divorced each other in 2016. Then, Joanne’s ex-husband, Daniel went on to announce his engagement with his then partner Robin Sue Hertz Hempl in Nov 2014. But it’s hard to tell about Joanne Smith’s relationship status.

Where Is Daniel Baldwin’s Ex-Wife Joanne Smith-Baldwin At The Moment?

Well, Daniel Baldwin’s ex-beau, Joanne Smith-Baldwin, seems to be enjoying her subtle and low-key life right now. After she divorced her ex-husband, she probably made a distance from the limelight and media. Due to her quiet life, it’s confusing to know anything about her personal life and relationship status.

Along with that, the custody of their daughters was not awarded to any party in 2011. Whoever got the custody of the children might be taking good care and responsibility. And talking about Joanne’s drinking addictions, she probably chose the track with her sobriety.

It seems as though Joanne does not want to show up again in the spotlight and make a fuss again. Rather than that, she is certainly happy with her usual life. Plus, Joanne Smith possibly does not use any social media handle and does not seem to be an active social media user. So, in all, Joanne Smith is perhaps living a subtle and private life.