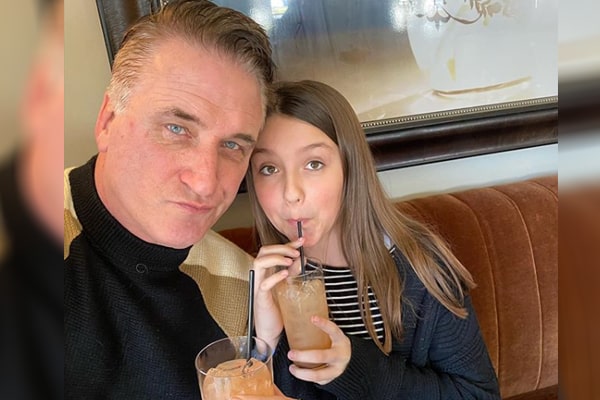 Daniel Baldwin is the second eldest of four Baldwin brothers. Although he is not as famous as Alec Baldwin, and Stephen Baldwin, he has credits for a few promising films and roles. Most prominently known for the characters in Homicide: Life on the Street, Paparazzi, etc. Daniel has made a pretty reputation for himself as an entertainer.

Besides Daniel’s fame as an actor/producer, he is also a proud father of five children from different relationships. For now, we will be discussing Daniel Baldwin’s daughter, Avis Ann Baldwin, with the former British model, Joanne Smith.

Daniel Was Happy To See Avis Looked Like His then-wife, Joanne.

Daniel was pretty ecstatic when his daughter looked more like his then-wife, Joanne Smith. According to People, Baldwin’s ex-wife was comforted as he was experienced with labor and wasn’t nervous.

Although the pair ended up divorcing, their daughter still look up to their parents. Furthermore, Baldwin’s ex-wife is leading a private life while their daughter, Avis Baldwin, makes occasional appearances on his Instagram.

Daniel Baldwin’s daughter, Avis, is pretty funky and is close to him. The father-daughter duo’s photographs are the highlight of Baldwin’s Instagram.

Has a Sister and Many Half Siblings

Avis Ann Baldwin is not the only child in the house. Daniel Baldwin and former model, Joanne Smith, had another baby girl, Finley Rae Martineau Baldwin, in August 2009, almost a yeat after Avis’ arrival.

Both Daniel Baldwin’s daughters are very close to one another and spend most of their time together. Furthermore, Avis is the second youngest amongst Baldwin’s five children.

Avis Baldwin’s father, Daniel Baldwin, is famous for his relationships besides his acting career and larger than life family reputation. He welcomed his first child, a daughter from his first wife, Cheryl Baldwin. The pair welcomed an adorable daughter, Kahlea Baldwin in 1985, who has now matured as a director and actor.

Baldwin’s relationships/marriages failed, but he was present in every child’s life while they grew. Thus, being around such beautiful personalities must have taught him well and is raising his two daughters, Avis and Finley, away from the spotlight.

As mentioned, Avis Baldwin’s parents met in alcohol rehab in Malibu. Baldwin’s ex-wife, Joanne served as a chef at the facility. The pair married shortly after their meeting in July 28, 2007.

The former couple had many ups and downs throughout their relationship, but the rope broke when Avis’ mother Joanne Smith was arrested after she violated her probation by driving under the influence. Following the arrest, Daniel Baldwin filed for divorce and temporary restraining order against her citing her as a danger to his two daughters.

Interestingly, the pair had reconciled and dismissed the restraining order as well as divorce. But, things were pretty rough, and Baldwin’s ex-wife filed for divorce in 2012.

As for now, both Joanne Smith and Daniel Baldwin are living their lives away from the media scrutiny. While Joanne remains grounded, Daniel had announced his engagement with an entrepreneur, Robin Sue Hertz Hempel. Likewise, he is also busy grooming his daughters.

The name Avis is a French form of the Germanic Aveza, a name of uncertain meaning. However, it relates to the Latin avis, which means bird. Similarly, Ann is of Hebrew origin, which means favor or grace.