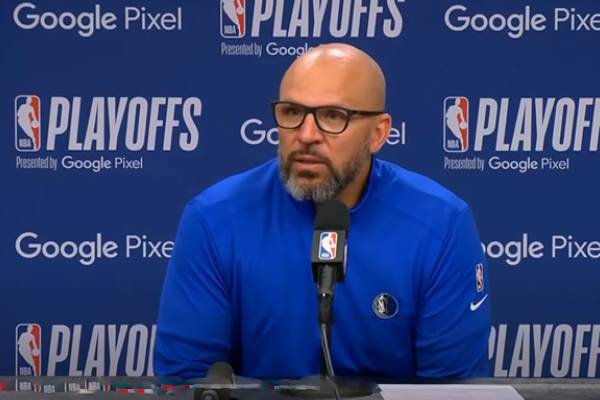 Jason Frederick Kidd, Jason Kidd is a talented basketball coach of American nationality who is now serving as a head coach of the NBA’s Dallas Mavericks. In addition, he is a former point guard and was named NBA All-Star ten times.

Before joining Dallas Mavericks, the coach served as an assistant coach of the Los Angeles Lakers from 2019 to 2021. With his extraordinary career as a player and coach, he has gained considerable fame in the league. As a result, Jason’s family members have also come into the spotlight of the media.

Hence, in this article, let’s get to know all of Jason Kidd’s children and how they have grown up.

Is A Doting Father Of Seven Children

The Dallas Mavericks head coach shares a blissful marital life with his wife, Porschla Coleman Kidd, also known as Porschla Kidd. She is a former model and an entrepreneur. Before exchanging wedding vows with his current partner, the coach was married to his ex-wife, Joumana Kidd, from 1997 to 2007.

Jason and Joumana were together for a decade, and they have four children together. They are Jason Kidd Jr., Trey Jason Kidd, and twin daughters, Jazelle Kidd and Miah Kidd.

On the other hand, Jason and his current wife dated for about three years before they walked down the aisle and even welcomed their first child, Chance Kidd, in 2010 before their marriage. Furthermore, the couple is blessed with two more daughters, Noah Grace Kidd and Copper Anne Kidd.

Also Read: How All Of Derek Fisher’s Children Have Grown Up

Jason Kidd Jr. Is The Eldest Son Of The Coach

Among all of Jason Kidd’s children, Jason Kidd Jr. is his firstborn. He was born to the coach and his former wife, Joumana.

Furthermore, Jason Kidd’s son opened up about his sexuality and revealed that he wanted to keep the crown as the “gay son” in the family.

Moreover, Jason Jr. showed off his good looks with several shirtless pictures of himself and his boyfriend. In an interview with TMZ, the oldest Kidd also said that his sexuality doesn’t change him. It only makes him the pink glittery sheep of his family, and he owns it.

His Second Son Is A Co-host Of A Podcast

Jason Kidd’s second son introduces himself as a basketball lover, a podcast co-host, a part-time dad joke crafter, and a part-time trouble maker. Trey Jason is a co-host of the podcast 360degreepodcast, which is also available on YouTube. He and his friends Miles Brookins and Matthew Brookins started the show on 06 April 2022.

In addition, Trey also has a clothing project named The TJ K Project. He sells different merches designed by him and his team. Some of the highlighted products include T-shirts and Black HTGR sweatshirts which cost around $40 to $60.

Moreover, Jason’s second son also writes blogs consisting of his thoughts about basketball and other things. On his website, he has shared how basketball has been his entire life, and he understands it more than anything. Thus, he wants to give back all the knowledge and memories the sport has given him.

Besides, TJ Kidd once complained about his dad for being an absentee father. In a lengthy Instagram post, he shared how his father was never there for him and his siblings and how Jason divorced them alongside their mom, Joumana. Furthermore, Trey revealed trying to make the relationship work with the head coach, but it proved futile. Hopefully, the father-son duo has reconciled and cleared out any misunderstandings.

Joumana and Jason Kidd’s daughter, Jazelle, was born along with her twin sister Miah on 26 September 2001. The twins are inseparable and spend a lot of time together.

Additionally, Jason Kidd’s daughter Jazelle is a Loyola Marymount University graduate and is into dancing. While her twin sister, Miah, often shares pictures of traveling to different places.

As already mentioned, the head coach’s third son, Chance Kidd, was born before he married his current wife. Chance seems to share a close bond with his father. He also has an Instagram account, and going through his posts, it is safe for us to say that he is also a basketball lover.

Furthermore, Chance Kidd’s younger siblings, Noah Grace and Copper Anne Kidd, are still young and must be growing up with all the love and care they need. They might also inherit the passion for basketball and follow in their dad’s footsteps someday when they grow up.

Finally, we wish all the Jason Kidd’s children a happy and prosperous life ahead.

Jason is a Greek word derived from the word “iaomai,” which means To Heal. Thus Jason means A Healer. Trey is a name of Middle English origin, and it means Three or Third. Hence, combining Trey and Jason would mean The Third Healer.

The French word Jazelle is a name given to a girl which means God will Be Willing. The name Miah has an English origin with the meaning The Sea.

The English name Chance means Fortune or Luck. The word Noah comes from the Hebrew word, Noach, and it means Rest or Repose. Meanwhile, Grace is the Latin name that means Charm and Generosity.

Copper is a word that comes from Middle English and means a worker in copper. At the same time, Anne is a name of Hebrew origin and means God has Favored Me.