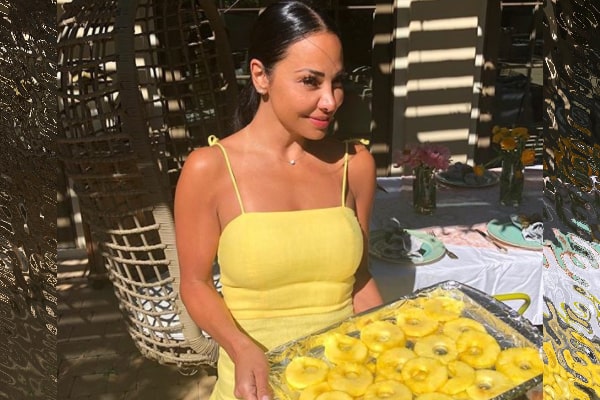 Jason Kidd is a basketball coach and former player working as an assistant coach for the L.A Lakers since 2019. Besides having an outstanding record as a player and now continuing to make a remarkable career as a coach, Kidd had an evil persona of a husband.

Have we forgotten the time Jason pleaded guilty to a domestic abuse charge for assaulting his first wife, Joumana Kidd? Despite all the rough past, the former couple had found peace and raised kids.

We’ve heard enough of Jason Kidd and his professional tales, but here’s everything you need to know about Jason Kidd’s ex-wife, Joumana Kidd, a successful television personality and gorgeous mother of three.

Well, let’s be honest here, Jason Kidd dated bomb women. His former partner, Joumana Kidd, is a beautiful actress with at least two acting credits on her IMDb. She had appeared in a couple of films, including Vamp, Let’s Talk About Pep, Breaking Bread, etc.

Besides films, Jason Kidd’s ex-wife, Joumana Kidd, also has credits for reality tv shows like Bethenny, Wow, Undateable, etc. She has appeared in several other shows that gained her fame and money. Furthermore, Jason Kidd’s former spouse is famous as an actress who works as a tv host.

According to Joumana Kidd’s Linkedin, she works as a tv host and previously worked as a reporter for NBA-TV in Secaucus, New Jersey. Likewise, she was also reported to be one of the finalists for the NFL Monday Night Football but was eventually taken over by Lisa Guerrero.

Jason Kidd’s ex-wife reportedly runs JoumanaKidd Inc. since 2001. She further noted herself as a lifestyle editor at Hudson Mod magazine. Besides being involved in television, she is actively participating in many non-profit organizations. She also acts as the board member with ‘our Open House,’ an organization dedicated to children’s welfare.

Additionally, born on 28 September 1972, Joumana Kidd graduated from the San Francisco State University with a degree in Speech Communication. Besides a television personality, her resume includes her career as a model appearing as a Bud girl for Anheuser-Busch.

Not every relationship are beautiful; some leave profound traumatic experience and teaches valuable lessons about letting go. Similar is the story of Jason Kidd’s ex-wife, Joumana Kidd. On a fateful day, she met a retired NBA player, Jason, and fell in love resulting in a few blissful while other profound learnings.

The troubled former couple shared their vows on February 21, 1997, amidst friends and families. Although their marriage was long, it was full of challenges for both the partners. Furthermore, the couple indeed welcomed three kids together, but will it be harsh to call their marriage a mistake? or even a nightmare?

Was Assaulted During The Ten Year Marriage

Well, as mentioned above, not every marriage is ‘sugar and sweet and everything nice’; a few are smelly potatoes and rotten tomatoes?

Meaning, Jason Kidd’s first marriage with Joumana was nothing but prickly. Throughout their marriage, the couple found new fame because of continuous headlines citing their violence against one another. For instance, the pair entertained the public after a heated argument made headline all over magazines.

The couple grew apart from blowing kisses on court before a free-shot to throwing fries over the simplest confrontation. Finally, after a decade of marriage, Kidd filed for divorce on January 9, 2007, citing ‘extreme cruelty’ during their relationship.

First of all, if it rings a ting on your head, it was Jason who pleaded guilty to domestic abuse against Joumana. Well, they have solved their problems and went through counseling. However, Jason filed for divorce, which was answered with a counterclaim for divorce on February 15, 2007.

Jason Kidd’s ex-wife, Joumana Kidd, claimed that the Lakers assistant coach ‘broke her rib and smashed her head into a car’s console. She further made claims of numerous infidelity and accused him of impregnating women around the country.

Joumana further called Jason a narcissist and denied his accusation that he’d been the victim. She revealed that the famous point guard-at the time had regularly punched and choked her instead.

The former Kidd couple’s exclusive divorce made their lives a little complicated and heavily scrutinized by the world. However, Jason’s estranged former partner unapologetically spoke out about the divorce and the kind of wrath she had to experience after the media turned their dispute into a national sensation. Well, media never change, do they?

As stated above, Jason and Joumana’s marriage was the biggest challenge. Despite the wrath, they still stayed married for a decade and welcomed three beautiful children, a son, Trey Jason Kidd, twin daughters, Jazelle Kidd, and Miah Kidd. The pair also share an older son, Jason Kidd Jr. who loves to keep a crown of the ‘gay son‘ in the family.

In a statement, the former pair’s oldest son announced his sexuality and called himself a pink glittery ship of the family. Talk about a positive attitude!

Joumana Kidd’s children were adversely affected by their public divorce, especially her son, T.J., who was only 8 or 9 years old. They have grown up into able adults and are leading a respectful life of their own.

Furthermore, Joumana’s kids maintain good relationships with their father and are active on Instagram. Moreover, Joumana Kidd’s Instagram is full of her beautiful face and moments with her kids and friends. With almost 5k followers on Instagram, Joumana wishes her kids and parents on their special days.

Well, Jason Kidd’s former spouse believes that the divorce taught her valuable life lessons. She further confessed that her personality and outlook on life changed drastically after a tough divorce. Well, God made Joumana suffer only to bless her with the best life she’d ever wished for.

Although we do not know who Joumana Kidd’s boyfriend is, or even if she’s dating one, we know that her glow up is real. As for Joumana’s ex-husband, he’s happily married to Porschla Coleman since 2011.

Furthermore, former Mrs. Kidd’s charm shows her satisfaction with life, surrounded by her kids and loved ones. Let’s hope this continues, and Joumana Kidd reaches more significant milestones in life.