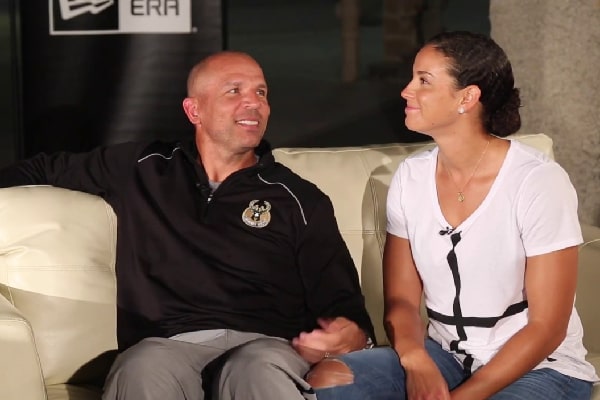 Jason Kidd‘s retirement as a Knicks member in 2013 was the initiation of his coaching career. He was named an immediate head coach of the Brooklyn Nets before the 2013-14 season. As of now, he is serving the Los Angeles Lakers of NBA as an assistant coach. The 10-time NBA All-Star had a tumultuous relationship with former partner Joumana Kidd.

However, Kidd has gone through massive change and is happily married to former model wife, Porschla Coleman Kidd. The Kidd couple has been married since 2011 and has welcomed three incredibly beautiful kids together. Furthermore, the world knows enough, Jason Kidd as a coach, a player, and a father.

However, Jason Kidd’s wife, Porschla, has been watching her husband succeed from afar. Therefore, we are here to talk about Jason Kidd’s partner, Porschla. Behold to witness Mrs. Kidd in her full glory and her identity before marrying Kidd.

It takes a fated partner to come to turn your life around. Similar is the story of Jason Kidd with his beautiful wife, Porschla, who used to be a runway model for Front management.

However, Kidd’s spouse revealed that her focus from a full-time model has shifted to being a full-time mother and an entrepreneur. Additionally, when asked her about her passion besides modeling career, Mrs. Kidd had talked about her eagerness to be a mother and a wife.

Moreover, Porschla revealed that a single mother motivates her the most. Although Mrs. Kidd is on hiatus, she still keeps her modeling portfolio on her Instagram bio, which by the way, is private.

Besides modeling, Mrs. Kidd has also appeared in a few television shows, including Khloe & Lamar and Star Search. As of now, Jason Kidd’s wife is living her dream as a mother of three and running a business.

Although Porschla Kidd rose to fame as Justin Kidd’s wife, she has the fame of her own. Aforementioned, Mr. Kidd’s partner is living her dream as a wife and mother. Besides that, she has become an entrepreneur.

Inspired from motherhood, gorgeous Porschla started a clothing line for babies. During an interview, she revealed that she hated shopping for her kids as they grow up fast.

Similarly, the clothing line was named after her first son, Chance Kidd. She further described her clothing lines as convenient and easy for boys who enjoy jumping around and find it challenging to wear appropriately. The infant’s apparel includes jumpers, sleepwear, pajamas, etc.

As a model, a person needs to go through rigorous training, diet, and mentality. Along with the face, one needs to maintain physical well being, which led Porschla Kidd towards Yoga.

As mentioned, the former model-turned-yoga teacher met her former lover and American entrepreneur, Russell Simmons, through her interest in yoga. According to Daily News, Russell and Porschla met in Atlanta at a party. The former pair discovered their shared belief that yoga was essential for them to become the people they were.

Simmons-Coleman’s relationship deepened as their interest in the science of yoga grew. However, the relationship was brief, but it ended with no hard feelings. The former power couple parted ways in 2008 and birthed several speculations regarding their breakup.

However, outspoken as ever, Jason Kidd’s wife, Porschla, spoke out against rumors claiming they were on good terms. It was around the time when she met her to-be husband and father of her three kids.

Married To Jason Kidd Since 2011

Well, fate plays mysteriously and makes you meet a person out of nowhere. And just like that, a stranger suddenly changes your life and becomes one of the most influential people.

Such is the story of former troubled NBA star Jason Kidd and his model wife, Porschla. They started dating in 2008 as Porschla had just broken up with her famous boyfriend, Russell, and Jason was coming out of his tumultuous marriage with actress Joumana Kidd.

Hence, there was understanding and the need for change. Accordingly, the Kidd couple found a mutual ground and stayed in a relationship that gradually shifted into parenthood.

Gradually, the Kidd couple shared vows on September 10, 2011, surrounded by friends and family. The awaited wedding, followed by a 13-month-long engagement, was secluded from the media. However, Mr. Kidd did post a few pictures on his Twitter.

Sadly, The Kidd couple’s business is only their business and are private. About their relationship as well. Could it be the secret behind their decade-long marriage? What do you say?

Despite their passiveness on social media, the couple makes several appearances at events together, assuring their almost perfect relationship.

The Kidd family is an ever-growing family. As Jason Kidd’s wife, Porschla is very passionate about being a mother. She has dedicated her life to become a doting mother of three kids.

Porschla gave birth to her first child, Chance Kidd, in 2010, a year before they walked down the aisle. Furthermore, they were blessed with a daughter, Noah Grace Kidd, in 2012. According to Mrs. Kidd, Jason picked their children’s name, Chance and Noah Grace.

Moreover, the former model, Porschla, and Lakers’ assistant coach, welcomed their third child, Cooper Anne Kidd, in 2017. Kidd’s daughter, Cooper’s birth, forced him to miss one of his important games, but it’s fair.

As of now, the Kidd family feels complete with the children’s giggles and to witness their growth. But is Cooper their last, or will Jason and Porschla plan on expanding their family more? Only time can tell, so we can only wait and watch.

Did we mention Porschla Kidd’s husband, Jason is a father of three more kids from his previous marriage? If not, he is a proud father of a son, Trey Jason Kidd, and twin daughters, Miah Kidd, and Jazelle Kidd. The Kidd family is close, and Porschla loves her step-kids equally.

Besides being a mother, Jason’s sweetheart’s favorite hobby is being a philanthropist. She is a full-time social worker with great works and dedication to changing the world. Let’s have a look into that.

Well, it’s essential to pay the universe back with good deeds. Therefore, Porschla Coleman Kidd is all about helping needy people. She works with ‘The Jason Kidd Foundation’ that aims to provide better education for vulnerable kids. Moreover, Porschla also served as the executive director of the Foundation.

Although the non-profit organization seems to have ceased operations, she performed well for children’s wellbeing. Besides the Kidd Foundation, she worked with a charitable organization called ‘The Leukemia & Lymphoma Society,’ a voluntary organization to fight blood cancer. She helped raise funds for the organization.

Similarly, Jason Kidd’s life-partner also uses her fame to help raise funds for cancer, like when she came on Morning Show, where she helped raise funds for breast cancer and survivors.

Well, Jason Kidd’s wife, Porschla Kidd, is a philanthropic person with so many things going on. Well, ironically, a passionate mother with her last name ‘Kidd’ is doing her best raising two daughters and a son while being a good mother. Let’s hope to see more in the future.