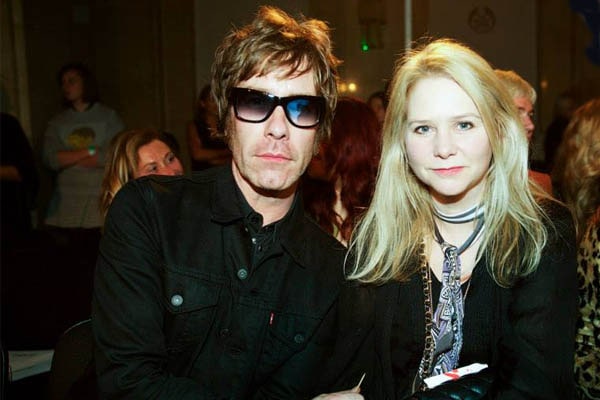 Lee Starkey is a doting mom to triplets whom she welcomed with her partner, Jay Mehler. Image Source: Social Media.

Lee Starkey is the only daughter of the celebrity drummer Ringo Starr with his first wife, Maureen Starkey Tigrett. Currently, she is famous as an English makeup artist, stylist, and a promising fashion designer. Starkey first rose to fame after starring in a commercial with her renowned dad in the late 1980s. However, for most of her life, she stayed away from paparazzi, choosing to pursue a career in fashion designing.

The beautiful daughter of Ringo Starr, Lee Starkey, is in a romantic relationship with former Kasabian/Beady Eye guitarist and present Gallagher bandmate Jay Mehler since early 2006. The pair together are parents to triplets, two sons, Jakamo Mehler and Smokey Mehler, and a daughter, Ruby Mehler. Here, find out more about Lee Starkey’s children and what they are doing in the present.

The occasional singer, Lee Starkey, began dating the Philadelphia-born musician in 2006. After being in an intimate relationship for some years, the romantic couple became parents to three kids at the same time. They welcomed triplets, Jakamo Mehler, Ruby Mehler, and Smokey Mehler, in late 2009.

All the three children of Lee Starkey are close to their mother’s family members, granddad Ringo Starr and uncles, Zak Starkey and Jason Starkey. Similarly, Lee Starkey’s triplets are also close to their cousins, Tatia Jayne Starkey, Sonny Starkey, Louie Starkey, Rock Starkey, and Budy Starkey. Though they never appear together on the media platform together, they probably share a great bond behind the camera.

All Three Of Lee Starkey’s Children Are Keen Musicians

Lee Starkey’s offspring, Jakamo, Ruby, and Smokey, are keen musicians who seem to follow their parents’ and granddad’s footsteps in the music industry when they grow up. The most pleasing thing is that their legendary grandpa, Ringo Starr is their mentor who often gives them music lessons.

The current twelve-year-old triplets of Lee Starkey, Ruby, Smokey, and Jakamo have dreams of becoming musicians ever since their grandad started giving music lessons to them. While talking to Britain’s Daily Mail, Lee said that her kids are all taking after their grandfather in the music department. All three of Lee Starkey’s children started learning music several years ago.

Lee Starkey’s son, Jakamo, is learning drums, and another son, Smokey, is doing both drums and guitar. Similarly, her daughter, Ruby, plays the piano. It seems like the next Beatles, or probably a new band, is on the way. We can already imagine the Starkeys and Mehlers forming a new band when these little rockers grow up.

Lee Starkey And Her Family Prefers Their Kids Far From Limelight

It might not surprise you when we say that all the Starkey family members prefer to keep their personal life away from media scrutiny. They rarely show up before the paparazzi together. Moreover, none of the Starkey family members, including Lee Starkey, seems to be available on social media handles. If they have social media accounts also, then their posts are limited and do not give hints about their private lives.

Hence, Lee Starkey’s children are living a normal life far from the reach of media peoples. The last time they were spotted together in public was in 2016 while they were out with their parents. At present, the soon-to-be teenagers, Jakamo, Ruby, and Smokey Mehler live a peaceful life with their parents in England.

The French origin name Jakamo means In the back. Similarly, the girl name Ruby is of Latin origin, which means deep red precious stone. Smokey is a boy name of English origin which refers to Soul of fire.