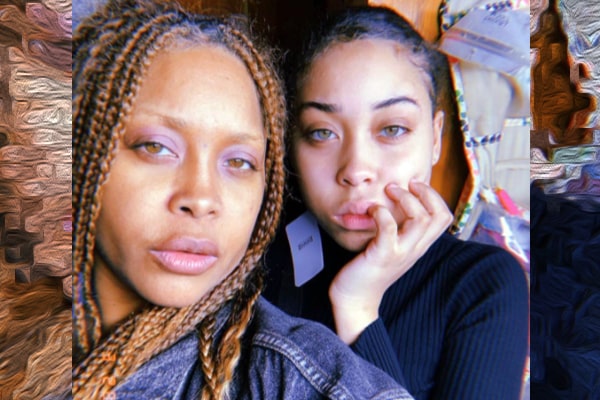 Erykah Badu's daughter, Puma Sabti Curry, who sings, is the replica of her mother. Image Source: The D.O.C's Instagram.

The Neo-soul queen, Erykah Badu, has released several albums and singles throughout her decade-long career. Besides the mind-blowing career, she also embraced motherhood at a very young age with her former boyfriend and co-parent, Andre 3000.

Furthermore, Erykah welcomed her second child, a daughter with American rapper, The D.O.C. Also, the legendary icon is known for her co-parenting skills; we shall talk about that eventually.

But for now, let’s look into Erykah Badu’s daughter, Puma Sabti Curry, and her life in a blended family. You shall amaze yourself by the achievement of the young lady, so, stick until the end.

Daughter With Former Partner, The D.O.C

Aforementioned, Erykah Badu welcomed her second kid with her former boyfriend, The D.O.C., on July 5, 2004. The only child of the couple is the spitting image of Erykah, and fans seemed astonished looking at their striking resemblance.

Furthermore, the budding talent, Puma, is growing up with her half-siblings from both her parents’ side. She has an older brother, Seven Sirius Benjamin, born to Erykah and Andre 3000. Likewise, she also has a younger sister, Mars Merkaba Thedford, from her mother’s relationship with Jay Electronica.

From Puma’s father’s side, she has an older sister, Amber Lynn Curry, and two younger brothers, Daren Ojiro Curry, and Legend Love Curry. Also, Puma is deeply loved by both her parents despite their separation. Moreover, Erykah and The D.O.C. agreed on co-parenting and have maintained a strong friendship ever since.

Likewise, Erykah Badu’s daughter, Puma, is a daddy’s girl as she seems to share many quality times with him. Nonetheless, the talented young lady is equally loved by her mother, who occasionally shares her picture on Instagram.

Erykah Badu’s twin daughter, Puma, is very active on social media handles, including Instagram, Tiktok and tried vlogging on YouTube. She has amassed 81.4K followers within months of starting her Insta page. Furthermore, most of her uploads are her TikTok and her selfies with her friends.

The sassy-looking teen is undoubtedly enjoying her youth to the fullest. Besides making regular uploads, she also enjoys corresponding with her followers as per story highlights.

Likewise, Puma’s TikTok is as massive as her personality, with about 467.5K followers. The gorgeous teen loves to boast her vocal talent and enjoys trends on the entertaining app. She also uploaded a few duets and dance videos.

Besides TikTok and Instagram, Badu’s daughter also hopped on to the Internet’s biggest video-sharing platform, YouTube. Her channel isn’t that big, but she attempted vlogging a year ago, garnering 300+ followers.

Moreover, Curry’s most recent upload on her YouTube is her flaunting sweetest voice.

The strong genes of the 90s queen, Erykah Badu, are undeniable. She bestowed her beauty and quirk in her daughter. The ever enigmatic singer, Badu’s daughter, Puma, is as eccentric and grounded as she is.

Additionally, Puma is not just the spitting image of her mother but inherited loads of talent, including the sense of fashion and music. At just 13, Puma followed her mom’s footsteps and was featured in Vogue Mexico in 2017. Besides twinning in complimentary patterns and abstract colors, she learns well from her iconic mother about fashion.

Interestingly, appearance is not the only thing Badu and Puma share, as they have already shared the same stage. The invincible duo performed a duet in 2020 on Good Morning Texas before Puma sang the same song on her birthday.

The mesmerizing yet powerful voice came in recognition once Erykah posted a video of Puma singing a cover of Rihanna‘s Stay. Furthermore, she continues to share her daughter’s video on her Instagram.

Likewise, Puma gained attention after uploading videos of herself singing. The Internet went *kaboom* in a minute, comparing her vocals to that of Disney princess. Well, Erykah Badu’s daughter has already added a high-fashion editorial shoot to her resume, and there’s no telling what the future holds.

But for now, Puma relished her talent with pride and wowed her mom, even with her velvety voices. Moreover, her mother, Erykah, noted that she is ‘literally her’ and added that she found it fascinating that her daughter is her ‘xerox copy.’

Celebrated Her 16th Birthday With A Makeover

Erykah Badu’s baby girl is the sweetest little lady who has this powerful appearance. Well, that was enhanced on her 16th birthday as she celebrated it with a stunning hair makeover.

Known for slaying fierce hair, Badu let her daughter experience the gorgeous red wig. The celebrity hairstylist, Jonathan Wright, convinced the teen to go wild and said she needed something to make her skin-pop.

Furthermore, after a few home photoshoots, the proud parents, D.O.C. and Erykah, decided to record Puma’s sweet 16th birthday message for her. Hence, Puma Curry is blessed and loved dearly by her parents.

The name Puma has a Latin origin, which means mountain lion. Likewise, Sabti means circulating and has Urdu origin.