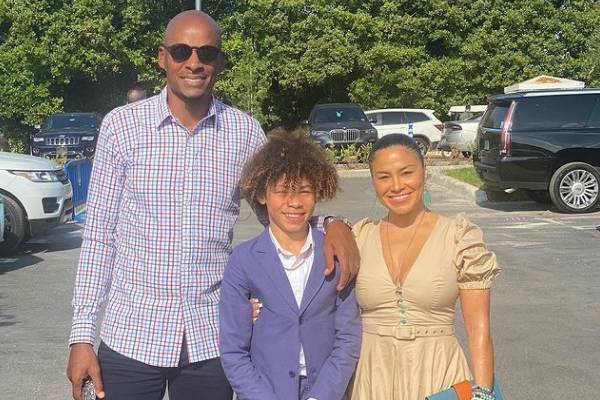 Owing to Allen’s success in his professional life, his personal life has also gained a lot of media interest. The former athlete appears to be someone who does not divulge his personal information. Yet, he is not afraid to share small glimpses of his life. Furthermore, Ray is very outspoken about his son’s experience as a diabetic patient.

So, in this article, let us learn about the struggles of Ray Allen’s son, Walker Ray Allen. Moreover, let us see if Walker has followed in his father’s footsteps.

Has A Loving Family

Ray Allen and his wife, Shannon Walker Williams, welcomed their son, Walker Allen, in 2007. Before Walker, the couple had a son Walter Ray Allen III, named after Ray, and his father, Walter Ray Allen Sr. Walker’s parents also welcomed two sons: Wynn Allen and Wynstan Ryan Allen, in 2009 and 2012, respectively. Evidently, Ray and his partner named every one of their kid to carry the initials W.R.A.

Additionally, Walker also has an elder half-sibling Tierra Allen, who his father had with his former girlfriend, Rosalind Ramsey.

Allen’s children are incredibly close, and the siblings frequently appear on their parents’ social media profiles. Walker’s mother constantly expresses her gratitude and regards herself as extremely fortunate to be the mother of such beautiful children. Additionally, his parents place a strong value on family and teach their children the necessity of growing up to be healthy and responsible individuals.

So, let us send our best wishes to Walker Allen and his family and hope that their connections grow with time.

Living with diabetes is challenging. No day is like the other. But having to watch your two-year-old kid suffer from a life-threatening disease is much worse. So in 2008, when Ray was supposed to be playing in one of the most important matches of his life, he was instead in a hospital room contemplating if the struggle was even worth it. The reason: his 17-month-old son, Walker Allen’s diagnosis with diabetes.

The doctors first diagnosed Walker with Type 1 diabetes after a test where his sugar level reached 639. Moreover, the doctors predicted that the baby boy would die if he did not receive insulin. So, it is safe to state that when Walker’s parents first found out that their son has juvenile diabetes, their worlds came crashing down.

Nonetheless, Walker and his family have now learned to cope with the disease and do everything to ensure that the kid remains healthy. Ray has even partnered with Freestyle Diabetes, a continuous glucose monitoring device so that he and his partner can be aware of any changes regarding Walter’s blood sugar level.

So, let us all hope that a lasting solution for diabetes will be discovered one day, and Walter will be free of his suffering.

Ray Allen’s kid is undeniably a force to be reckoned with when it comes to talent. A singer, pianist, artist, and above all an excellent basketball player, Walker’s abilities have already caught the eyes of many.

Walker is currently a basketball player at Gulliver Prep High School, where his father is the team’s basketball coach. Talking about his father, the former athlete also spends time playing basketball with his children outside of school. Ray Allen is undoubtedly thrilled that his children enjoy basketball as much as he does.

As Allen’s kid is still very young, he has yet to play in significant matches or win notable victories. Still, Walker hopes to play in the professional league once he grows up. Furthermore, when asked which major league team he would like to play for, the celebrity kid stated that it didn’t matter who he played for as long as he was good at it.

So, let us wish Walker Allen well for his future endeavors and hope to see him win more trophies than his father in the future.

Walker is a name mostly common in German and English-speaking nations. First, it could refer to a cloth fuller or an officer whose duty consisted of walking or checking a specific portion of a forest. Secondly, Ray is of Germanic origin, which means wise, advisor, or protector.