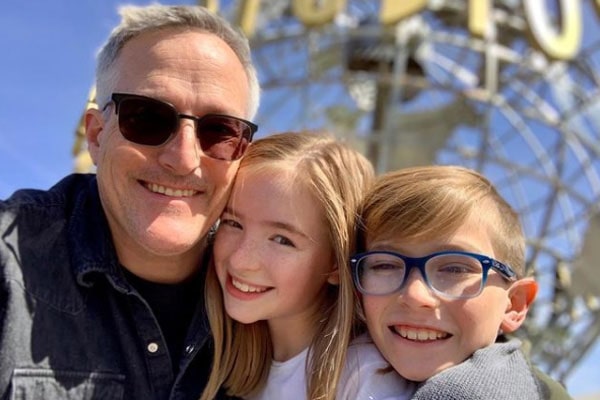 Richard Patrick is one of the prominent personalities of the American music industry. He is famous among millions of people worldwide for being the lead singer of the rock band Filter. But, more than that, the brother of Robert Patrick, Richard, is also popular for being a committed family man with a supportive wife and two children.

Singer Richard Patrick married his love, Tina Johnson, in 2006 and is living a happy life with her ever since. Together, Richard and Tina have two children, daughter Sloan Luella Patrick and son Ridley Patrick.

Here, in this article, let us give you more information about both of Richard Patrick’s children and their upbringing.

Sloan Luella Patrick is the eldest child and only daughter of the Filter frontman, Richard Patrick, with his long-time spouse, Tina Johnson. Cute Sloan made Richard and Tina parents for the first time on 23 February 2008. Reportedly, her weight was 6.15 pounds at the time of her arrival.

The birth of Richard Patrick’s daughter, Sloan, proved to be pretty lucky for Richard and his band ‘Filter.’ They released their fourth record entitled ‘Anthems for the Damned‘ in May of the same year, after a five-year hiatus.

Furthermore, growing up, the adorable little girl of Richard Patrick, Sloan inherited the acting skills of her uncle, Robert Patrick. As mentioned by Richard Patrick on his social media pages numerous times, his girl is already gaining some fame in the acting industry.

According to Richard, Sloan’s debut as an actor was from his band’s 2014 ‘Surprise‘ video, which also featured him and guitarist Jonny Radtke. As a voiceover artist, Ms. Patrick voiced her first character in a video game named Durango: Wild Lands! in 2018.

Both the proud father, Richard, and his overwhelmed daughter, Sloan, had shared a bit of behind-the-scenes footage from the game on their respective Instagram. Yes, you heard it right. The teenage daughter of Richard, Sloan, is available on Instagram, but her mom, Tina, manages it for her at the moment.

Ridley Patrick is the second and youngest child of rockstar Richard Patrick with his better half, Tina Johnson. He arrived a year after his sister’s birth, making the Richard Patrick family complete, on 2 September 2009.

Unlike his big sister, Richard Patrick’s son, Ridley Patrick, seems to have an inclination towards music rather than acting. At such a young age, Ridley is already showing interest in learning to play different musical instruments, including the flugelhorn.

Going through the photos shared by his father, Richard, it looks like young Ridley is pretty good at playing the flugelhorn.

Besides, the energetic child of Richard Patrick, Ridley is also fond of skating. His father often shares snaps of him and his sister, Sloan, skating through the roads of California. Seeing the pictures, it seems like they are good at skating too. Apart from that, Ridley and his elder sibling, Sloan, enjoy going on outings with their family during their holidays.

Currently, a middle school student, Ridley Patrick, is quite young to decide about his career. However, seeing his interest in music, it seems like we will see another Patrick shining out in the American music industry shortly. Who knows. We might see the father-son duo, Richard and Ridley, performing on the same stage soon. But, for now, Ridley’s focus is only on his studies and learning new things.

Both Of Richard Patrick’s Children Are Close With Their Cousins

Richard Patrick has three more siblings besides his elder brother, Robert Patrick. He has two sisters, Karen Patrick and Cheri Patrick Cook, and another brother, Lewis Patrick, who are all tied in a marital knot and have children. And, both of Richard Patrick’s children, Ridley Patrick and Sloan Patrick, are very close with their uncles and aunts and their kids.

Both Ridley and Sloan attend the special occasions of their uncle Robert Patrick’s children, Austin Patrick, and Samuel Patrick. Similarly, they also wish their cousin sisters, and brothers on their birthday.

Moreover, all of them love to spend their vacations together, having fun at their home and visiting different places. We hope their bonding will remain as strong as it is now till eternity. And, may we see and hear of them achieving success in their own chosen career paths in the upcoming days.

The boy’s name Ridley is also of an Old English origin, which means reed meadow.