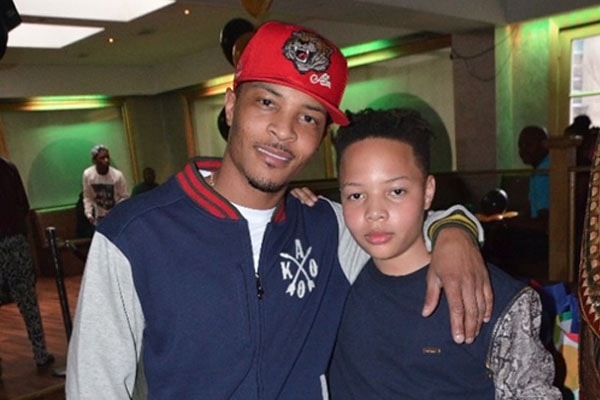 T.I. and his son Domani Harris

One of rapper T.I.‘s son, Domani Harris is all grown up now. He is also into music as his father and already been nominated for an award. It looks like T.I.’s got a good influence on his son.

Domani Harris is T.I.’s son with LaShon Thompson. He made his reality TV debut at the age of 10 by appearing in T.I. & Tiny: The Family Hustle, a VH1 reality series.

Like T.I. his son, Domani is also a rapper. The father-son duo was nominated for a Tony Award for Best Score for their work on Spongebob Squarepants: The Musical. Unfortunately, they didn’t win it,  “The Band’s Visit” took home the award, While attending the show, T.I. was the epitome of a proud father. His happiness contained no boundaries as he sat beside his son. The rapper T.I. took on to his social media handle to express how happy he was for his son.

Reading the caption, we can apparently figure out how happy T.I.was. When Domani entered the music industry, many people had doubts about him. But looking at him now seems like those folks were wrong. Last year in an interview with the RESPECT, Domani stated that he wants to evolve in the best person that he can be. He surely is trying his best.

Influence of his Father

Many kids look up to their parents as their role model. And Domani Harris also considers his father T.I. as a good teacher. In an interview with the Newsweek, Domani says his father exceeds expectations with his work ethic and takes care of many people. So Domani Harris is also probably looking up to be like his father.

So as the 17-year-old Domani is making his mark in the industry, T.I. will make sure to help his son whenever he is in need of him.

The name Domani has an Italian origin. It means “tomorrow.’