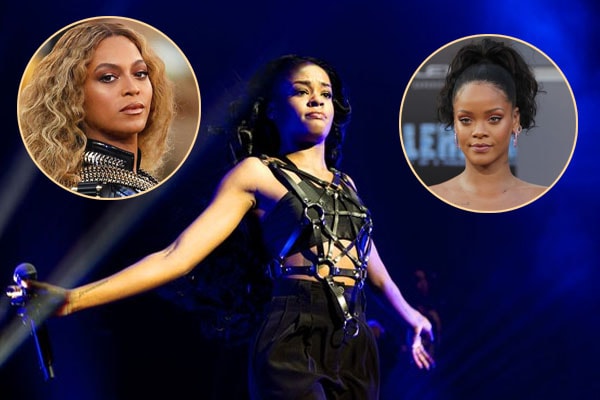 Guess who’s back? Back again, Azealia Banks is back with a new feud with the Queen B, Beyonce, again. Azaelia Banks accused Beyonce with a claim that she ‘steals from talented women.’ American singer Banks has got a lot of names under the list of people with whom she’s had a feud with. Plus just year, she shared Rihanna’s number with her fans.

We all know Azealia Banks has got a lot of hit songs, but she is famous for her disputes with other celebrities. Just a couple of years ago, the “212” singer Azealia Banks was in a Twitter feud with Disney’s Skai Jackson over Zayn Malik. And now she is at it again.

The Harlem rapper Azealia accused Beyonce of stealing choreography from her music video of “Count Contessa.” In one of many of her Instagram stories, Azealia criticized Jay-Z’s wife Beyonce for lacking originality.

Azealia’s claim came after Beyonce and Jay-Z ended theirs “On the Run II” tour stint at MetLife Stadium. In one of her Instagram’s stories, Azealia mentioned that her ex-dancer Ashanti had choreographed for Beyonce and at that moment stole the original choreography that was made for Count Contessa. 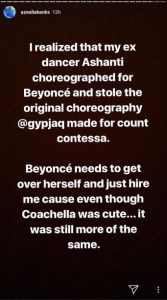 This is not the first time that Azealia has taken shots against Beyonce. In 2016 Azealia said Beyonce exploited black female artists and claimed she needed to stay under Jay-Z’s foot.

She needs to stay under Jay-z’s foot where she belongs, and stay out of the creative woman’s way.

Singer Beyonce is yet to say anything.

The feud between the “Diamond” singer, Rihanna and Azealia Banks, started after Rihanna expressed her discomfort against president Donald Trump‘s ban on Muslims. In one of her tweets, Rihanna stated that she felt disgusted. Plus the news was devastating and she even called President Trump an immoral pig for implementing such bulls**t.

Azealia seems to be in favor of Donald so in retaliation she ordered Rihanna just to shut up and stay put. After exchanging some heated words, Azealia shared Rihaanna’sphone number with her fans with a caption “Bombs away!”

And in return, Rihanna posted a screenshot of the message she sent to Azealia Banks. In the text, she stated Azealia Banks has a drug and sex addiction.

However, both Rihanna and Azealia banks deleted their posts.