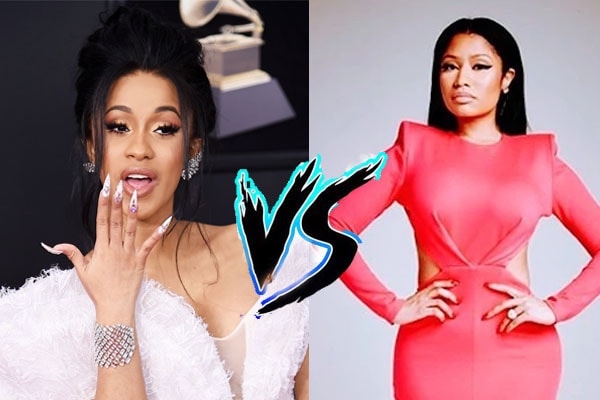 Cardi B and Nicki Minaj Physical Fight at NY

The feud of Cardi B and Nicki Minaj went out of hands at New York Fashion Week party. While Cardi B approached Nicki’s table as Cardi just wanted to address Nicki for the lies she was spreading and when Cardi B reached there one of the security elbowed her and we can see the lump on Cardi’s forehead clearly.

We all know how much aggressive Cardi B can be from the episodes of LHHNY. She usually hurls her shoes at her opponent vigorously and with Nicki, she did the same. The “I Like It” singer Cardi took off one of her shoes and threw it towards Nicki but missed.

Looking at the video of Cardi B and Nicki Minaj’s brawl it looked like Cardi owned the night as Nicki stayed far from her without even flinching. And as for Cardi B, she went home with one shoe on her feet like princess Cinderella. As we know Cardi B’s net worth is $8 million, losing a shoe won’t do her any harm.

After returning Cardi B took on her Instagram to post a rant as no name was mentioned but we all know who she was pointing it to. Going through the rant it seems like Nicki Minaj was pointing out the capabilities of Cardi B of taking care of her daughter Kulture Kiari Cephus. We mean everyone would be pissed off if they criticise someone’s abilities to raise their child, bad move Nicki.

Looks like all the past rumors about the beef was true after all. With the current ongoing feud between Eminem and MGK, hip-hop fans have got another feud to be happy about.

Who said What? After-Effects of Nicki-Cardi fight

Hip Hop has its way to keep people intact and engaged in every feuds and happiness. Likewise, 50 Cent entered the fray of Nicki Minaj and Cardi B’s feud at the New York Fashion Week party. Responding to controversial rapper Tekashi 6x9ine and DJ Spinking on how they had taken their side of team Cardi B. Tekashi who had released “Fefe” with Minaj on July 22, 2018, switched side dancing to Cardi’s “Bodak Yellow”. 50 Cent’s point seems legit on this one which emphasizes another potential uprising feud between Tekashi and Minaj. However, Tekashi was spotted with Minaj on September 09, 2018.

During a recent episode of Beats 1’s Queen Radio Show Minaj addressed the aftermath of the heated moment between her and Cardi. Nicki seemed to be relaxed and laid back in a video posted by TMZ while Cardi was charging shoes at her. She stated that the recent dust-up was humiliating, Cardi being angry and sad was not funny. Nicki highlighted the point that Cardi is the highest point in her career and the tempered act of her to throw shoes doesn’t quite fit in.

American Plus Sized Model Tess Holiday had witnessed the first-hand horror of the Nicki Minaj and Cardi B fight at the Harper Bazaar party on Friday, September 7, 2018. Tess explained the chaos erupted while Christina Aguilera was singing “Genie in a Bottle” and the highlight of the day had been the fight and not the party itself. Holliday is the first plus-sized model in history to have signed to a mainstream modeling agency did state that Nicki Minaj’s ex Meek Mill was also there to witness the crazy Cardi Nicki Fight.

It came as a shock when Mill ended his year’s long feud with Drake. What’s more surprising is that he is trying his best to squash the feud between Cardi and Nicki. Meek had stated to a close source that he had lots of love and respect for both rappers and wanted them to set aside their differences to work together. After his Jail time, Mick’s perspective might have changed so he wants to help maintain peace in the industry.

Feud between Cardi B and Nicki Minaj

In an interview, Cardi told that people want the drama because it’s entertaining. But when Nicki dropped her song “Swish Swish” featuring Katy Perry, she dropped Cardi B’s fiance Offset.

Then later on during an Instagram Live session Cardi B sounded furious. She mentioned how idols become rivals. So was that meant for Nicki Minaj? But later on, Nicki teamed up with Offset and 21 Savage for a song titled “No Flag.” One line of the lyrics read “Lil’ bitch I heard these labels tryna make another me/ Everything you getting little hoe is the cause of me.”  Though Nicki denied that she was targetting Cardi. Nicki Minaj also has got a feud with Mariah Carey.

The “Bodak Yellow” singer Cardi then took on performance in New York at MoMa PS1 Warm Up event to address her foe. She screamed loud and clear for her enemy to listen. The question here arises again was that a call out for Niki Minaj?

Everything seemed cool when the “Anaconda” singer Nicki congratulated Cardi for her Billboard Hot 100 No. 1 with “Bodak Yellow.” Plus later on, they also collaborated on Migos‘ song “Motor Sport.”

Thank you!! This means sooo much coming from you!! ❤ https://t.co/vPGwFiBAiQ

It seemed as if there never was a feud between Cardi B and Nicki Minaj.

The sparks of the feud reignited again. When Cardi B was commenting on her sister Hennessy Carolina’s photo, a user asked Cardi why she had pressure with Nicki Minaj despite Nicki being nice to her. To which Cardi replied “Nice how? Tell me?” 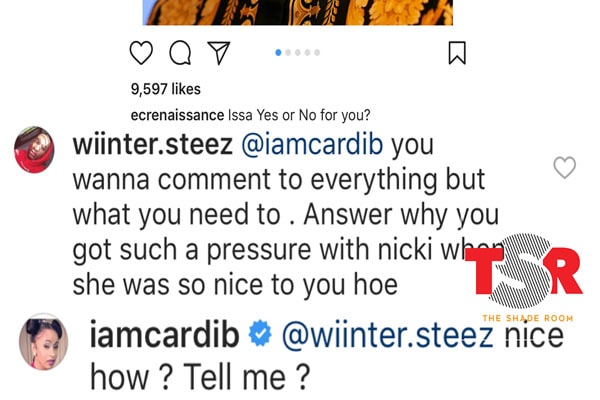