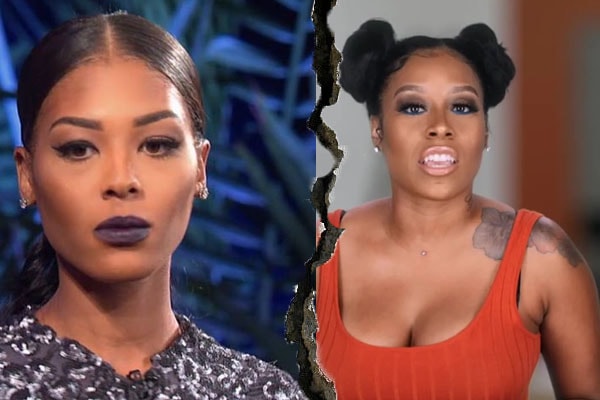 As Russell Peters always says “Somebody gonna get hurt real bad,” it is the same case in this celebrity feud. A “Love & Hip Hop” fight is probably heating up, and somebody is likely to get a beating. Actress Tiffany Campbell said that fellow castmate Moniece Slaughter should expect a certified street a** beating.

Moniece Slaughter is an American TV personality who rose to fame from “Love & Hip Hop: Hollywood.” Likewise, Tifanny Cambell is also a cast member of the same show and has acted in a movie named Like Fine Silk.

Just like a spy, the Love & Hip Hop star Moniece made a very detailed FBI-inspired post. She tried exposing Tiffany Campbell as a cheater, or at least a lady who has a bunch of guys. Moniece claimed that Tiffany was with her ex-boyfriend Lil Fizz seven hours ago before she was with another dude.

Moniece then did a whole lot of math to prove Tifanny is a cheater. And since Tifanny wasn’t there, she threatened to give Moniece a good beating when they encounter one another in real. It is just a matter of time when the two will face one another in reality, and either party will end up being hurt.

The two also had a heated up exchange of words on Twitter regarding Moniece’s girlfriend AD.

It shouldn’t be so long bestie it should be welcome home. At the end of the day you don’t like me and I don’t like you and it’s only because

Tifanny thought that Moniece was an opportunist and scandalous. During a confrontation with one another, both the ladies didn’t leave a single chance to go at one another using harsh words. You can see the hatred between the two in the mentioned video.

A couple of months earlier it was revealed that Fizz (father of Moniece’s child) was dating Tifanny Campbell. It’s not that Moniece is sad Fizz being with Tifanny, but what she hates is that Tifanny is someone who disrespected her.

Lil Fizz is disloyal to his baby mama Moniece by being with Tiffany as felt by Moniece. The two also had a terrible meeting where Tiffany Campbell threw a bag of chips towards Moniece and was escorted out.