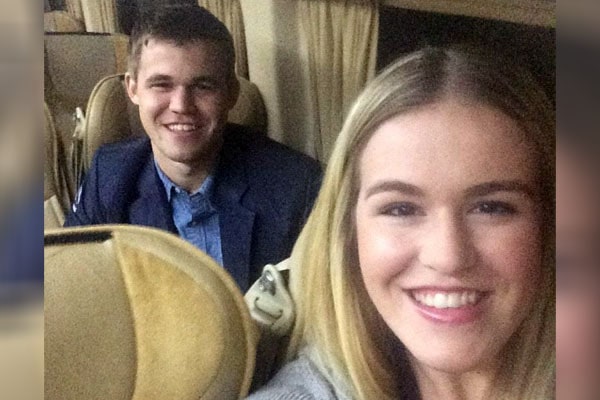 Since 2013, the Norwegian chess grandmaster, Magnus Carlsen is winning the World Chess Championship, ranking himself as the world’s top chess player. He has won almost every chess tournament he has participated in. Besides being a number one chess player worldwide, Carlsen is also an occasional actor, model, and social media star. He is the founder of Play Magnus AS, a company that develops chess-oriented online games and mobile apps.

The man with brilliant chess skill, Magnus Carlsen, was born to engineers Henrik Albert Carlsen and Sigrun Øen as their only son. He grew up with three gorgeous sisters, Ingrid Øen Carlsen, Signe Øen Carlsen, and Ellen Øen Carlsen.

However, in this article, we will mainly emphasize one of Magnus Carlsen’s sisters, Ingrid Øen Carlsen, who looks very much like him.

Ingrid Øen Carlsen is the younger sister of Magnus Carlsen, who made him a proud big brother for the first time on 5 May 1994. At the time of her birth, Ingrid’s family was residing in Brussels, Belgium. However, when she was four, she and her whole family moved back to their homeland, Norway. They lived in Lommedalen, Bærum, for some period and later settled in Haslum, Oslo.

Furthermore, Ingrid had a passion for dancing since her early childhood. So, after completing high school, she enrolled in Spin-Off Forstudium I Dans (Spin-Off Pre-study in Dance) with a dream to be a professional choreographer and dancer. After acquiring a one-year dance course from Spin-Off, Ingrid moved to Sweden to join Balettakademien Stockholm in 2014, from where she graduated in 2017.

Currently, Ingrid Carlsen lives with her family and owns a dance academy in Norway.

Played Chess For Some Years In The Past

Like her elder brother, Ingrid Carlsen also grew up playing chess with her siblings, parents, and other family members. Her dad, Henrik, a keen chess player himself, introduced the game to her elder siblings, Magnus and Ellen, when she was just a year old. Seeing her brother and sister’s interest in chess, her whole family began playing it as an enjoyable family pastime. Ingrid also quickly learned the rules of chess by seeing her family’s games and began playing on her own too.

Later, Ingrid also took part in several chess matches held near her place. According to her database in chessgames.com, she actively participated in chess tournaments from 2007 to 2010. Her last FIDE rating is 1598. Some of the games played by Magnus Carlsen’s sister, Ingrid Carlsen, are as below.

Ever since 2010, Ingrid Carlsen does not seem to have participated in any more competitions. But, she still plays chess with her family members during her free time and often accompanies her brother in chess tournaments.

Owns A Dance School In Norway

Aforementioned, Ingrid Carlsen dreamt of being a professional dancer when she grew up ever since her early childhood days. So, she earned degrees in dance from Norway as well as Sweden. Currently, she is a certified dance choreographer and owns a dance academy in Svarttrostveien, Oslo, Norway.

Ingrid’s dance academy focuses on providing high-level training for aspiring dancers from different age groups. Besides being an owner of a dance academy, Ingrid might be giving dance classes at other dance schools in Oslo. However, neither Ingrid nor any of her family members have disclosed it in public yet.

Furthermore, Ingrid Carlsen is available on Instagram, Twitter, and Facebook. But, her social media posts are available for limited people only. So there is still much more to know about her, including her relationship status. We hope to get familiar with Ingrid’s other details as well so that we can update it to you. For now, she is living happily with her family and friends, maintaining possible distance from the media people.

Ayrton Senna’s Brother Leonardo Senna – Is He Also A Racer?