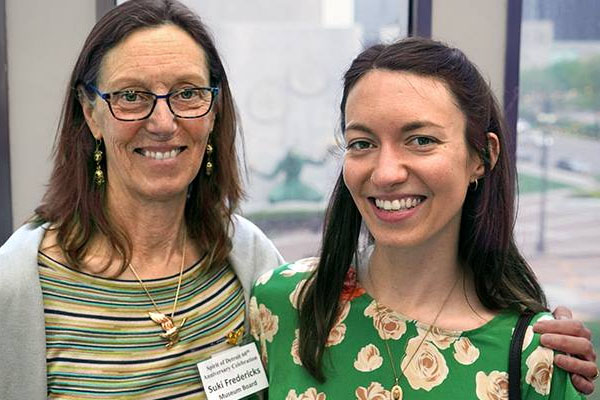 The celebrated American actress Jennifer Lawrence is in a marital relationship with art director Cooke Maroney since 2019. Lately, Lawrence and Maroney are in the headlines as they are expecting their first child together. So, while their romantic life is being a topic of media scrutiny, their family members are also gaining considerable attention.

We have already discussed Jennifer Lawrence’s family, Gary Lawrence, Karen Lawrence, and her brothers in our previous articles. So, today, let’s get familiar with Cooke Maroney’s family, Suki Fredericks, James Maroney, and Annabelle Maroney, who also prefer a secretive life like Cooke and Jennifer.

Jennifer Lawrence’s parents-in-law, Suki Fredericks and James Maroney own an Oliver Hill Farm in Vermont. The previous residents of Manhattan, New York, Cooke Maoroney’s parents moved to Leicester, Vermont, in 1986 to pursue a quiet, rural life, where they settled and began farming.

Reportedly, Fredericks and Maroney’s main intention to move to Vermont was to raise their then two-year-old son, Cook, far from the city’s strained life.

In the beginning, their 775 acres farm was home to 250 cows, of which 125 were milking cows. But sadly, in 1994, a spark in their utility shed caught fire on the milking barn. With the help of their neighbors, they pushed their cows out of the barn and saved all but a cat and two calves. Later, the Maroney family sold all the cows.

Despite that, they continue raising chickens and sell eggs to the Middlebury Natural Foods Co-Op. Also, they rent their land to neighboring organic farmers for different purposes. Besides, they are also involved in other various professions.

Before beginning a farming life, Cooke Maroney’s father, James Maroney, was already working as an art dealer in various art galleries. During his first ten years in Vermont, he split his time between his farm and NY, where he did a part-time business of a private art dealer. Previously, he was the Head of American Paintings at Christie’s American Art.

After being quite free from farm works, James Maroney has more time to pursue his other passions. He sells art in different parts of the United States, though he travels much less than before. While not busy with his art business, he enjoys working on his farm and grow organic foods.

Cooke Maroney’s mother, Suki Fredericks, serves as a Vermont-based paintings conservator. Since 1976, she is continuously taking care of paintings at different museums and various private collections throughout Vermont.

Jennifer Lawrence’s mother-in-law, Suki Fredericks, holds an M.A. in Art History and a certification in conservation from NYU’s Insititute of Fine Arts. Also, she is a professional associate of the American Institute for Conservation (AIC). Moreover, Suki has also pursued a three-year organic certification process along with her husband, James, during her farming days.

Besides conserving paintings, the daughter of Marshall M. Fredericks, Suki Fredericks, manages the farm fields with her neighbors who use them. Also, she managed kindergarten, grew a big vegetable garden, and raised pigs, turkeys, and sheep for the family for some years in the past.

While Jennifer Lawrence’s parents-in-law, Suki and James, are actively contributing in the field of arts, her sister-in-law, Annabelle Maroney, maintains a strictly secretive life. The younger sister of Cooke Maroney, Annabelle, does not appear much in public events with her family. Moreover, her family members also do not talk about her much in their media interviews.

However, we hope she might be sharing a great bond with her brother and beautiful sister-in-law, far from the media reach. Moreover, probably, she might be finding success like her brother in her chosen career path.

For now, all the members of Cooke Maroney’s family are living a peaceful life far from the excess media inspection. We hope to see them together on the same frame soon.