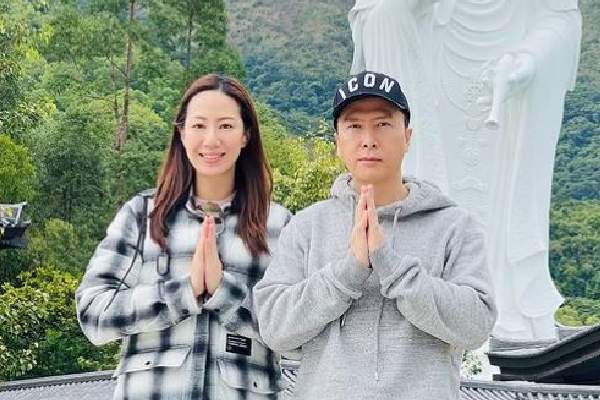 After years of being together in a relationship, it is often said that you lose the spark. But with the right one, the spark turns into an eternal flame. And in most cases, it isn’t the loss of the spark that kills the relationship but the lack of commitment to rekindle the romance. This article is about the long-term romance between Donnie Yen and his wife, Cecelia Wang, aka Cissy Wang.

Let’s get to know how even after two decades, the couple still looks new in love and about the charms of Donnie that wooed Cissy and their secret to a long, happy marriage. Keep reading until the end to know everything about Hong Kong’s most envied and beloved couple.

Some readers might not know, but Donnie Yen was married to Leung Zing-ci before Cissy Wang. Leung was a Hong Kong advertising executive. The former couple started dating in 1990, and after dating for three years, they tied the knot secretly in 1993. Unfortunately, their marriage didn’t even last a year, and the ex-couple filed for divorce. The twist of it all was that Leung only learned about her pregnancy after their divorce was finalized.

Leung decided to keep the baby and gave birth to a beautiful, healthy baby boy named Jeff Yen in 1995. His Chinese name is Man-Zeok Yen. Donnie might not be directly involved in raising his firstborn as the couple parted ways before Jeff was born. But he never ran away from his fatherly duties. Jeff is now a grown-up and is making his own name away from the limelight, unlike his father.

Head Over Heels In Love

How to know if you’ve found the one? Does the background music play? Or it’s the fireworks that set out? Donnie Yen’s wife, Cissy, might know the answer to our question. She met Donnie after she was crowned Miss Chinese Toronto Pageant in 2000. Cecelia wasn’t fully aware of Yen’s background as she wasn’t into movies and hadn’t watched Chinese films due to her upbringing in Toronto. But soon after the meeting, they started dating, and Donnie’s upright nature was one of the reasons she found him attractive.

Soon after the couple started going out, Yen proposed. They reportedly dated for only three months before they got engaged. At that time, Cissy was very young and conservative, so she asked Donnie to ask her parents for her hand, to which he obliged and flew to Toronto. Age is just a number, and the power couple proved it to be right. Donnie Yen’s wife is 18 years younger than him. But both stated that they were unaware of such a vast age difference. The couple got married in 2003 and have been together ever since. They are happy in love, and their social media are filled with appreciation towards each other.

Today, 20 years later, the couple is stronger than ever, even more so in love. They have two children together. Their daughter, Jasmine Yen, was born in 2004, and their son, James Yen, was born in 2007. In addition, Cissy and Yen co-founded their production company, Silver Bullet Pictures, in 2015. Together they have produced films such as Enter the Fat Dragon, Big Brother, and Chasing the Dragon. The couple has also launched their luxury eyewear brand called, DonniEYE. They are the perfect definition of growing together.

Talent Runs In The Family

Apart from being a great actor, Donnie is also musically gifted. Donnie Yen’s father, Klyster Yen, was a violinist, and his mother, Bow-sim Mark, was a soprano before she became a martial arts master. That’s how Yen got his musical talent. The actor was forced to play the classical piano which he hated initially. However, later he realized how much he loved to play and love music.

Just like their father, Donnie’s children are also musically inclined. In fact, his daughter Jasmine won a scholarship at the prestigious Berklee College of Music. While his youngest, James, is passionate about music and is also most likely to pursue a musical career. Overall, the Yens seem to be living a happy and content life.