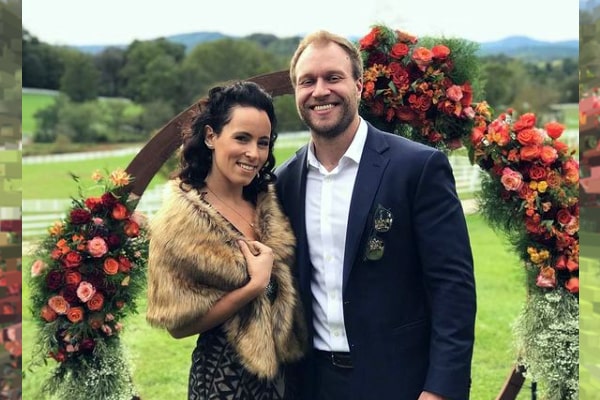 Piotr Czerwinski, famous as Furious Pete, is a Canadian competitive eater who holds fourteen Guinness World Records for eating. Besides, he is also a massive YouTube personality with about 5.16 million subscribers.

Besides having a thriving career, Pete had his beautiful girlfriend, Melissa Cvjeticanin, since 2009. Furthermore, they reportedly had planned on a wedding back in 2017, but no updates since. Thus, here, find all the juices to Pete and Melissa’s relationship and if they’ve tied knots or not.

Aforementioned, Piotr, aka Furious Pete, is a renowned competitive eater with 10+ world records to his name. Amidst all the achievements, one of his precious prizes is his partner, Melissa. The veteran couple has been dating since 2009 and is still together.

During a Q&A video, Furious Pete’s girlfriend, Melissa, revealed that she and her boyfriend first met at CrossFit gym. Moreover, Melissa also spilled out that it was her who’d asked him out on a date. She further went into detail, claiming she’d always put on the pants in the relationship and jokingly said that she took advantage of him after a few shots on the night they went on a bowling date.

Likewise, the power duo has also appeared in several other videos on Pete’s YouTube, and their social media engagement was equally admirable until January 2021. Interestingly, after five years of dating, Peter and Melissa got engaged in 2014.

As mentioned earlier, Pete and Melissa first met in a CrossFit gym. Hence, what better place to propose the love of your life more than the gym, correct?

In an almost 4 minute video, Pete came out talking about how he had always wanted to propose to his lover before he found out about cancer. He further detailed that the ring was a ‘hand-me-down’ from his mother when she was 25-years-old. Pete and Melissa’s engagement ring’s history dates back to the 1900s when his great-grandfather bought it, which Pete claims belonged to a Princess.

Pete’s video then transitioned to the gym. And after a couple of talks, Pete finally proposed to his long-time partner, claiming he chooses to spend his life with her. Moreover, the heartwarming video has gained two million views on YouTube ever since. Also, Pete’s fiancee seemed pretty emotional and hugged her partner tightly after a quick ‘yes.’

Has Furious Pete Married His Girlfriend?

Sadly, No! The fitness enthusiast couple is not married yet. The pair indeed seemed very excited about the next chapter of their lives. Moreover, they already planned their wedding and had a fixed date as well. However, the wedding had to be postponed as Melissa reasoned ‘life happened.”

Sadly, Furious Pete’s fiancee announced the sad news via her Instagram. On May 6, 2017, she wrote, “today’s the day we were planning to get married.” She further continued to reveal that the venue was booked, her dress was ready, and all the papers were sorted but sadly reminded that life cannot always be simple like that.

Pete’s wife-to-be also assured her followers that she’d marry Pete despite the obstacles and that she no longer desires a big wedding. She also warned people not to take anything in life for granted and concluded her long caption with “I love you bb boy” and a little heart.

Indeed life is not always fun and games. In fact, it tests you in many ways to grow your perspectives. It has been almost four years since their planned wedding day, but the couple is yet to decide on their new big day. However, they still uploaded pictures of them together throughout 2019-20.

Sadly, Pete lost his precious dog in January 2021, and that became his last post. On the other hand, his partner, Melissa, continues to post on her social media, but there are no traces of him on her Instagram. Well, in this era, the absenteeism of a partner in one’s social media does not conclude their relationship. Thus, let’s not get anxious.

We shall, hopefully, see the engaged couple, Melissa Cvjeticanin and Furious Pete, walk down the aisle soon.