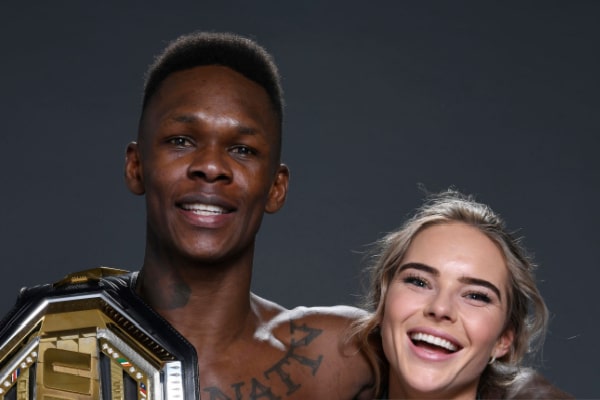 The former kickboxer and boxer is currently signed to the Ultimate Fighting Championship, where he is the middleweight champion. He is the no.4 ranked pound-for-pound male fighter in the UFC and widely regarded as one of the best strikers.

Adesanya is a huge anime fan and plans on making his own anime once he is done with his MMA career. Other than that, the 31-year-old is very private regarding his personal life. Looking at his lovelife, Israel Adesanya’s girlfriend has always remained a mystery.

Below let’s look into the rumors and speculations regarding the UFC champ’s lovelife and figure out who his partner is.

The 6’4″ fighter already has a decorated MMA career, with 20 wins and 1 loss. He also is the cover athlete for the recent UFC game alongside UFC’s BMF Jorge “Gamebred” Masvidal.

Despite being one of the highest-paid fighters in the organization, very little is known regarding his love life. Izzy would upload stories on his Instagram of a random girl trying different outfits in a store. This was during UFC 253, where he was scheduled to put his title on the line against middleweight’s muscle head Paulo Costa.

Since the event was taking place in Yas Island, Abu Dhabi, Adesanya might have been strolling around with his rumored partner. The fans only got to see Israel Adesanya’s girlfriend when UFC’s parent company Zuffa, LLC, posted pictures of them together.

The photo was taken during the post-fight segment after the Last Style Bender’s victory.

This mysterious lady with whom the UFC champ was looking happy had similarities with Australian actress Margot Robbie. The two times Oscar nominee is better known for her roles in The Wolf of Wall Street, Once Upon A Time...In Hollywood, Bombshell, and Promising Young Woman. The 30-year-old became a fan favorite after killing the role of Harley Quinn on the big screen for Suicide Squad and Birds of Prey.

Israel Adesanya’s girlfriend’s similarities with Margot are mostly because of the eyes and facial structures. The hair color is also something that the fans took notice of, including that beautiful smile. Despite the comparisons, the Harley Quinn actress and the City Kickboxing fighter’s girlfriend are not the same.

Is She A Ring Girl?

Sticking with exposed pictures of Israel Adesanya’s girlfriend after UFC 253, she was wearing something similar to a bathrobe.

The bathrobe incident started the speculation of whether this mysterious lady was a UFC ring girl. The fact that ring girls usually cover themselves up with bathrobe once the event is done was the main instigator.

It was made clear later that Israel Adensay’s girlfriend is not a ring girl since there are no records of her in the promotion and also uploaded a picture of his on his Instagram tagging Engage. It was just a dress that had a bathrobe design.

He was a subject of controversy when the 2018’s World MMA Awards Breakthrough Fighter of the Year was seen riding around New Zealand with a few underage girls. The fan-favorite Adesanya took Twitter to address this matter which was later removed.

As the MMA world had no clue before the Yas Island incident, rumors speculated the 2019 Fighter of the Year to be gay. One of the main reasons was his excessive change in hair color and his dress-up sense.

Eventually, everything would come to a pause after the leaked pictures and also a video. The anime lover was with his significant other in a bathtub enjoying a soapy bath in the video.

Regardless of everything, Israel Adesanya has done a great job in keeping his professional and personal life away from each other. He is one of the biggest UFC stars who has reached the celebrity level of Conor McGregor and Georges St-Pierre.

Also, when you look into his social media, the UFC champ is always seen trolling his opponents and fellow title contenders. Similar to his other half, Adesanya also likes laying low regarding his personal matters.

Looking into all the details, we now know that the 31-year-old is not single and has a shoulder to lean on. We wish the best to Adesanya and his girlfriend for their future and well-being. Hopefully, he opens up about his relationship timeline soon.