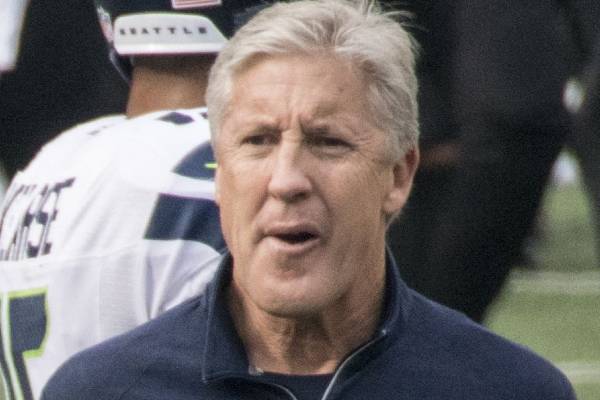 Pete Carroll and Glena Goranson have been married since 1976. Image Source: Wikimedia Commons.

Peter Clay Carroll, also known as Pete Carroll, is one of the oldest coaches of the NFL. Carroll serves as the head coach of the Seattle Seahawks and had previously served as the head coach at USC, New York Jets, and New England Patriots. Carroll has established himself as one of the most successful coaches in the NFL world and gained huge fame and fortune.

Apart from his professional life, many NFL fans are curious to know about Pete’s personal life. He has been married two times in his life and is the doting dad of three kids. Thus, in this article, let’s learn in detail about Pete Carroll’s wife, Glena Goranson, and their marital life.

Pete And Glena Met In College

The Seattle Seahawks head coach, Pete Carroll, shares a blissful marital life with Glena Goranson. The couple had met when they were attending the University of the Pacific. However, the year they had their first encounter has not been revealed yet.

On May 21, 1976, Pete and his wife walked down the aisle. The married duo must have gotten together for their mutual love of athletics. Since then, the love-smitten couple has been living a wonderful life with their kids and grandkids.

Moreover, before marrying her, Glena Goranson’s husband was previously married to Wendy Pearl for two years. After the short-lived marriage, Pete seems to have found a long-lasting love with Glena.

Pete Carroll’s Wife Is A Doting Mother Of Three Kids

It has already been over four decades since Pete and Glena have exchanged the vows. In all these years of being together, the pair welcomed three children, two sons, and a daughter. Pete Carroll’s wife, Glena, gave birth to their eldest child, Brennan Carroll, on March 20, 1979. Then, her daughter, Jaime Carroll, arrived on April 12, 1982. The couple’s third child is their son, Nate Carroll, who was born on March 24, 1987.

When the kids were younger, Glena and her husband did not share many details about them. She raised her babies with immense love and care away from media scrutiny. The children have all grown up now and are doing great in their respective fields of profession.

Glena Goranson’s hubby and kids are all doing great in their profession. In addition, they all are involved in sports-related works. Likewise, Pete Carroll’s wife Glena was also involved in sports during her youths. While attending the University of Pacific, she played indoor volleyball.

Glena was considered a volleyball star at the university. However, it has not been revealed why she stopped playing. She has not revealed anything about her current profession. Furthermore, when her husband was working at the University of Arkansas alongside Monte Kiffin, she offered to babysit his son, Lane Kiffin. Lane later grew up to be a well-known football coach.

In addition, Pete Carroll’s spouse is a woman of privacy. Even though her husband is in the limelight, he has not talked much about their personal life in the media. Similarly, she has also remained away from media scrutiny and does not have any social media accounts.

Nevertheless, Glena must be in great health and must be doing great for herself. Let’s hope we get to know more about Pete Carroll’s wife in the coming days.