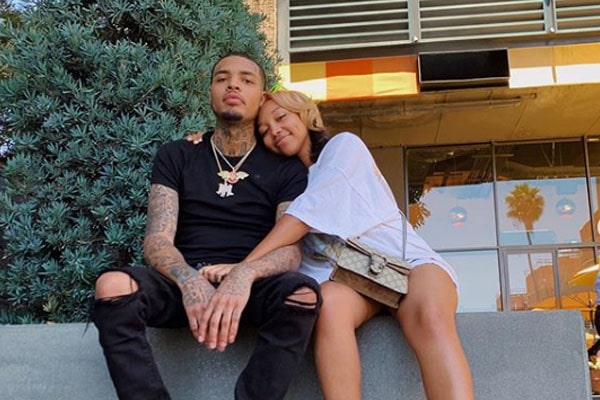 Zonnique Pullins and her boyfriend, Bandhata Izzy started dating each other in 2018. Image Source: zonniquejailee/Instagram.

The American singer and songwriter, Tiny Harris‘s many relationships over the years have resulted in the singer giving birth to as many as four children. Along with her three kids, two sons and a daughter, with husband T.I., she also gave birth to a daughter named Zonnique Jailee Pullins from her earlier relationship with Zonnie Pullins. And it seems now that her daughter Zonnique Pullins has found a love partner for her in rapper boyfriend, Bandhunta Izzy.

Zonnique is not new to dating popular men as she was previously in a relationship with NBA star Damian Swann. The two started dating in early 2017 but it seems their relationship didn’t last too long whatsoever, as it was over by the start of 2018. But now her love life seems to be back on track with her in love with boyfriend Bandhunta Izzy.

The rumors of Bandhunta and Zonnique dating started as earlier in 2018 when Bandhuta posted a cute video of him playing golf with Zonnique on Instagram. The video was incredibly cute and it confirmed that the two were seeing each other. The time they started dating is unknown as both of them have been very quiet about their relationship, but it does seem that they did start dating each other in 2018.

For those who don’t know Zonnique Pullins’ boyfriend, Bandhunta, he is a very talented American rapper from Baltimore and famous for his hit song “In Love Wit da Trap“. The rapper has over 94.1k subscribers on his YouTube channel.

He is seen constantly singing with his brother, Bandhunta Jugg, and had released an album titled “Code Blue“. He is set to achieve big things in the future. Plus, he has set a great platform with more than 610k followers on his Instagram account.

The cute couple is still madly in love with each other. Their love for each other is still as young as it was at the start.  Tiny’s daughter, Zonnique loves posting photos of herself with her other half on her Instagram. The young model and reality TV star stated that their relationship is so serious and have moved in together.

However, they have not taken their relationship to the next and final stage, marriage. Perhaps both of them are taking their time before rushing into such a committed relationship. The fans are eagerly waiting to see the couple’s wedding in the coming years too.

While Zonnique has remained quiet about her relationship with Bandhunta, she did manage to prank everybody on social media by faking an important announcement. She took to social media and announced that she was pregnant, which sent her fans into a frenzy. Surely, it was a shocker for her mother as well.

while y’all been waiting to hear from Kylie, ya missed my whole pregnancy??‍♀️ meet Whiskey? we’re looking for loyal God parents who will babysit whenever lol @ladieslovewhiskey

But, after people hounding her constantly asking her about her pregnancy, Tiny’s daughter, Zonnique swerved her fans by revealing that she has already given birth to a baby and it was none other than her cat, Whiskey. She further joked that she was looking for somebody to babysit the cat.