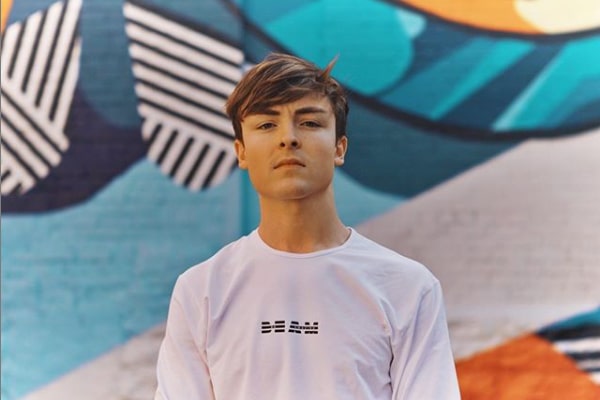 Gabrielle Moses is a YouTuber famous for her makeup tutorials, various challenges, and cosmetic reviews on her YouTube channel. Entertaining over 600 thousand subscribers, she has created a massive and loyal fan base.

Along with her burgeoning YouTube career was her exclusively open relationship with another YouTuber, Jack Brinkman. However, the pair have recently parted ways after almost five years of relationship. Today, let’s talk about Gabrielle Moses’s ex-boyfriend, Jack Brinkman, in this article.

YouTube has become a great platform to share one’s talent and life with the world. Among the YouTubers are Gabrielle Moses’s ex-boyfriend, Jack Brinkman.

Brinkman’s channel is doing great gathering 2 million subscribers. The former couple shared their moments, pranks, vlogs, and challenges on the vlog. Besides YouTube, the brilliant YouTuber, Brinkman, has considerable followers on Instagram as well.

Jack Brinkman is a super talented person with a witty personality. Gabrielle Moses’s former sweetheart has always mentioned that he would love to be a businessman, and schooling is to achieve that goal.

Initially known for gaming, he later changed his genre to vlogs and has amassed over 2 million subscribers by today. Moreover, after getting together with his ex-girlfriend, Gabrielle, they collaborated frequently. As a result, we have ‘Jack & Gab’ today. From the channel alone, Jack Brinkman’s net worth has escalated quite impressively.

Besides Brinkman’s YouTube salary, his wealth also includes merchandise. Furthermore, his net worth also comprises of his earnings from different brand endorsements. By the age of 20, Brinkman’s net worth is pretty impressive. Let’s hope the growth continues in the coming years.

Jack Brinkman Is A Family Person

Born on June 25, 1999, in Missouri, USA, Jack Brinkman grew up to be a gentleman. Born and raised in Missouri, Brinkman has a baby sister, names Olyvia Brinkman and loves his family.

Although Brinkman’s mother showed up in a few vlogs, regrettably, we couldn’t find her name. However, Brinkman always remembers to wish his mama happiness on special occasions.

Even though there aren’t much about Brinkman’s parents, Gabrielle revealed that his parents were as funny and caring people like Jack. He pranks them a lot and posts videos of them. Furthermore, in a prank video, he disclosed that Brinkman’s mother wanted him to get a degree. So, it seems like all of them are emotionally aware people and can have a heart-to-heart conversation casually.

Jack Brinkman is currently studying at Missouri State University. Interestingly, Brinkman’s father is a graduate from MSU, and he revealed that he always knew he was following his father.

YouTuber, Gabrielle Moses, and Jack Brinkman were in a relationship for almost five years. They were together since 2015 and enjoyed a very exclusive relationship.

The majority of their relationship was put forth for the public to witness, and they made a cute couple. Both Jack and Gabrielle met one another’s parents and were close to them. In a story-telling video, Jack spoke about his ex-girlfriend’s fear of meeting his parents.

They revealed that the meeting was pretty awkward, but they made a great bond eventually. Furthermore, Brinkman’s ex-girlfriend went to the same high school, and they went on prom together.

They were high school sweethearts and were enjoying a long-term relationship as teenagers. However, along with growth, distance, and a new environment, individuals start to learn more about themselves, which might not give proper closure.

Despite having a channel together enjoying their youth together, the couple decided to part ways eventually.

Aforementioned, as people start growing, they begin to search for their identity and learn from their experiences. The factor that Gabrielle and Jack Brinkman’s perfect relationship was the same growth and distance.

It looks like the couple ended their relationship entirely as they were going through some rough months. The couple went on to their respective YouTube channel and ranted about their split.

In March 2020, the couple opened up about their break up and revealed that split was because of miscommunication and confessed that they got back together and resumed their lives prior to the breakup.

Similarly, Brinkman’s ex-girlfriend, Gabrielle, posted another video addressing the breakup. In the video, she told the relationship has been a significant part of her life, and Jack was with her since she was 15. Hence, she seemed confused about who she was without Jack.

After the first part stormed the social media, she posted yet another video about the breakup and update. She talked about hating a change and accepting it. While Gabrielle is vocal about her emotions, her ex-boyfriend is staying off of social media.

Jack Brinkman’s Instagram and YouTube are silent since March. Let’s hope everything is going well in the former couples’ life and they come to understand that staying away from the public’s eye, having personal time is useful.