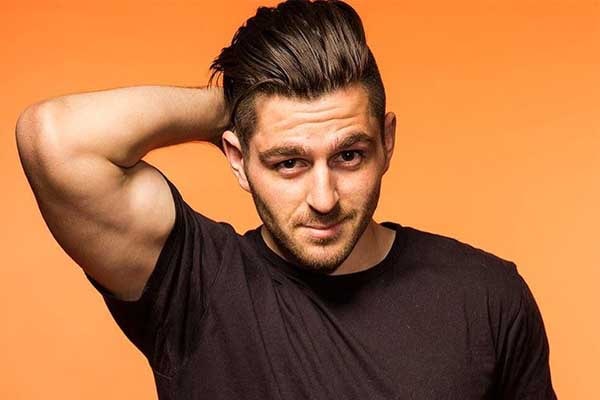 Julien Solomita is a really popular blogger and a web-content creator who joined the YouTube clan on December 8, 2012. His videos feature his pets and, occasionally, his partner Jenna Marbles. Jenna is also a sensational YouTuber with over 20 million-plus subscribers.

Both the couple run their own podcast on a separate channel, which is named after them, Jenna Julien. Not only that, they have another channel where they upload their gaming videos. Well, both the couple earn a hefty load of cash from uploading videos on YouTube and are living a comfortable life together with their dogs. That said, dogs are not the only thing Julien is into, he is a massive fan of tattoos too. In fact, he has a lot of them all over his body, so today we will look into Julien Solomita’s tattoo and the meanings behind them.

Julien Solomita’s arm tattoo is one of his biggest as he has many small tattoos but never had gotten a big one. His arm tattoo is the one which is the dearest to him amongst all his tattoos. He has a tattoo of a Slurpee cup on his arm. Slurpee is a frozen carbonated drink that can be purchased in the 7-Eleven.

The story behind it is not the craziest thing in the world but rather a simple one. Julien and his pals, Brandon & Andrew, when younger often went to 7-Eleven on 7-eleven, which is the 11th of July. On that specific day, the brand 7-Eleven used to give out free Slurpees to everyone. So, Julien and his friends made a tradition that on that particular day, they will always get a Slurpee from 7-Eleven. However, the main reason behind Julien getting the tattoo of the Slurpee cup is to cherish the moment he had with his friend Brandon who unfortunately passed away.

Julien Solomita’s girlfriend Jenna got a dinosaur’s tattoo and named it chef Jennifer. She says it’s her spirit guide, and she will whisper all her secrets to it. All of his friends got a tattoo and to find out more about that you can just watch Julien’s vlog.

Julien has a dancing skeleton on an island with a couple of coconut trees and a boat tattooed on his wrist. He calls the skeleton Mr. Max. It took Julien about nine hours of patience to get the tattoo done. Just by looking at the variety of tattoos he has all across his body we can simply assume Julien Solomita’s net worth to be of thousands of dollars.

Apart from that, he also has a buttercup tattooed on his arm. Buttercup was a cow who unfortunately passed away due to a heart attack. Julien first met Buttercup in 2017 while he was visiting the Gentle Barn. He decided to make this tattoo in memory of his favorite cow, Buttercup.

Julien also got an Iron Giant tattoo on his arm, which was made on an expo. It is a pixilated Iron Giant made below the Buttercup tattoo and above his Slurpee cup tattoo. The reason behind him getting this tattoo was, Julien grew up watching the Iron Giant animated movie and was a huge fan of it.

Julien Solomita has a cloud with a line tattooed on his wrist. Like always, he blogged the whole thing on his YouTube channel. His tattoo took merely twenty minutes to make and was created by Daniel.

Moving on, Julian and Collin Duddy have a show named last minute trip where they throw darts to decide where they will travel next. So while they were at the Shamrock Tattoo show, they decided to get tattoos based on where their dart landed on a piece of paper. That specific piece of paper contained various random drawing. Julien got a dog’s tattoo while Collin got a sunglasses’ tattoo.

The whole thing was blogged by Julien and also Inked, who uploaded it on their official YouTube channel. So, if you would like to see the entire thing do visit Julien’s YouTube Channel or Inked.