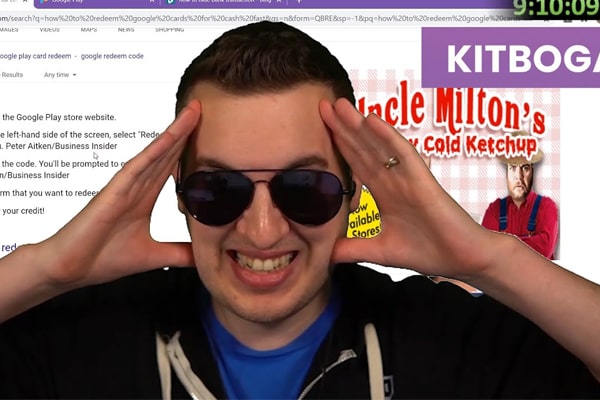 Scams can be in any form, from a government employee to owing IRS money for unpaid taxes, etc. It is nearly impossible to know who scammers are or how much they earn from tech support scams, but real vigilantes like Kitboga exists to deceive the deceivers.

Kitboga’s net worth has escalated quite impressively. He believes that it’s scam-baiting but also entertainment. Starting as a Twitch streamer, Kitboga’s journey into scambaiting begun in an attempt to avenge his grandmother. Or so the internet says.

Well, along with the impressive scam baiting career, Kitboga’s fans are humble and shower him with immense love and helped him earn a living solely through YouTube. Therefore, here we shall learn more about Kitboga’s earnings and scrutinize his income from YouTube. Let’s also see if Kitboga has other jobs to support his finances.

Also Read: YouTube Channel Treesicle, Meet All The Members And Know More About Them

Kitboga’s Net Worth Is Impressive

Aforementioned, Kitboga is an impressive Twitch streamer turned YouTuber. In mid-2017, Kitboga came across pre-recorded messages that scam baiters play during calls to convince the scammer about being a certified vulnerable person.

Hence, Kitboga’s YouTube journey started replicating the calls himself. By early 2021, he has accumulated 1.61 million subscribers on YouTube and several thousand followers on other social platforms.

Thus, Kitboga’s wealth has increased significantly in the passing years. So, let’s breakdown his earnings and see if YouTube is his primary source of earning.

Aforementioned, Kitboga’s journey as a YouTuber started in mid-2017 after coming across other scam baiters. Within a few years, Kitboga’s YouTube channel grew to 1.61 million and amassed views above 200 million. Hence, according to Social Blade, Kitboga’s estimated earning from his main channel, Kitboga, ranges between $2.5K to $39.8K per month and $29.8K – $477.2K per year.

Furthermore, Kitboga has already uploaded 300+ videos on his channel, which receives impressive views and admiration from his fans.

According to Social Blade, the scam baiter YouTuber gained more than 109K subscribers in mid-2020 and another 100,000 more in January 2021. Therefore, it wouldn’t be a ruse to say that Kitboga’s net worth is impressive and mostly because of his channel.

Kitboga likes to keep his real name anonymous. While engaging with scammers, he seems to enjoy his time. However, he is also involved in Twitch streaming with over 800k followers and a minimum of 27k+ views.

Thus, the cash flow from both his YouTube and Twitch combined must be massive. Besides, brand endorsements and sponsorship videos also add up a decent amount to his account.

Some of Kitboga’s merch are listed below, along with their respective prices.

Kitboga made a brand of his own and is earning quite well from his merch sales as well. Therefore, it is clear that, besides YouTube and Twitch, he has diverse ideas to boost his net worth every day.

What Is Kitboga’s Real Job?

According to Kitboga’s Twitter, he is an improv artist. Unfortunately, he prefers to keep his real name confidential for security purposes. While talking to Washington Post, he revealed that he has to keep his name secret because scammers would sometimes threaten revenge when confronting them towards the end of his calls.

Well, Kitboga seems to have taken his scam-baiting career seriously. He has been in the business of scamming the scammer since mid-2017 and barely looks back.

Moreover, he refrains from revealing his personal lives to his fans but continues to share knowledge about technical uses.

Besides scambaiting, YouTuber Kitboga actively promotes computer education and holds computer programming streams. Likewise, he also reportedly partnered with STEM organization FIRST in 2018, where he interacted with children interested in STEM through his stream chat.

Overall, Kitboga’s net worth predominantly comes from his YouTube. Besides, his merch also aids in his proliferating fortune. Thus, let’s hope to hear more leaps in Kitboga’s earning and advancement in his YouTube in the future.

Since Kitboga can earn adequate to earn enough bread and butter, he is also able to afford a luxurious life. However, he keeps his personal information private, and we hope that Kitboga’s lifestyle is lavish and fun.