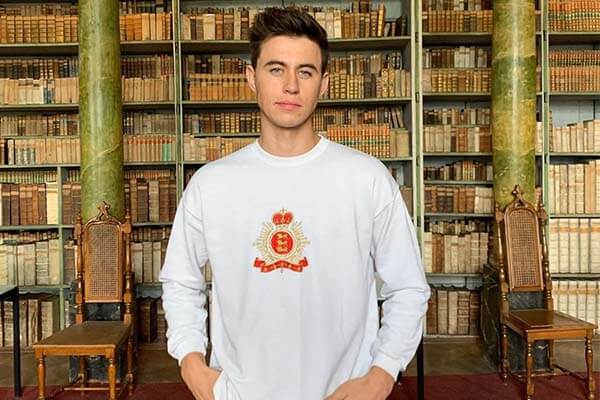 Nash Grier‘s net worth is estimated to be at $3.5 million. He earned all his wealth through his career as a YouTuber. As of July 2019, Nash has over 4.7 million subscribers on his YouTube channel, and he will reach 5 million subscriptions any day now. Starting his career by posting Vine clips, Nash is now wealthy, and his net worth is in millions.

Hamilton Nash Grier aka Nash Grier was born on December 28, 1997. He has three siblings; brothers Will Grier and Hayes, and a sister, Skylynn Elizabeth Floyd. Nash’s father is Chad Grier, and his mother is Elizabeth Grier-Floyd.

Talking about his relationship status, Nash Grier’s fiancé Taylor Giavasis is pregnant with his first child, a baby boy, as of July 2019. And the couple just had an extravagant baby shower!

As mentioned earlier, Nash Grier’s net worth is estimated to be at $3.5 million. His massive wealth is a result of his successful career as a YouTuber and social media personality.

In addition to that, Nash’s younger brother Hayes Grier’s net worth is an estimated $1 million. The brother duo is pursuing similar professions.

According to Social Blade, Nash Grier’s YouTube channel has earnings between $1.3K and $20.5K monthly. Similarly, the yearly earnings range from $15.4K to $245.7K. With that kind of ad revenue flowing in, Hayes Grier’s net worth is sure to reach $4 million soon.

Not many know that Nash Grier has other sources of income besides YouTubing. Nash has released many social media apps and mobile games, such as Cash Dash, Mobli and Challenged, among others. These apps are available on the App Store as well as the Play Store, and they earn a decent amount of ad revenue. The Viner-turned-YouTuber, Nash is enjoying the success of his products!

Further, Nash is a famous Viner. He used to upload a ton of funny and hilarious clips on Vine. Some of these clips were scripted, which means that businesses paid Nash between $25K and $100K to post promotional content. With this kind of brand endorsements, Nash’s net worth has increased quite a lot.

Nash Grier’s store on Amazon, called The Nash Grier Store, is one of the significant sources of his current estimated net worth of $3.5 million. The store has all kinds of merch on sale; you name it. He’s got t-shirts, hoodies, pop sockets, and many more. Here are some of the items in the store and their respective prices.

Undoubtedly, Nash Grier manages to live a lavish lifestyle with revenues from his various business ventures. He has got an entrepreneurial spirit, and we are guessing that he will continue in his journey of success. Further, it’s a little known fact Nash and his fiance Taylor run a photography business together, named Express Through Perspective. They print the photos they take on t-shirts and sell them through the website.

As mentioned, Nash and his fiancé Taylor are ready to welcome their baby son. Mrs. Grier is due in September 2019, ten weeks from now. With that amount of net worth, Nash is undoubtedly planning to host a grand celebration of his kid’s birth, as he did with the baby shower.