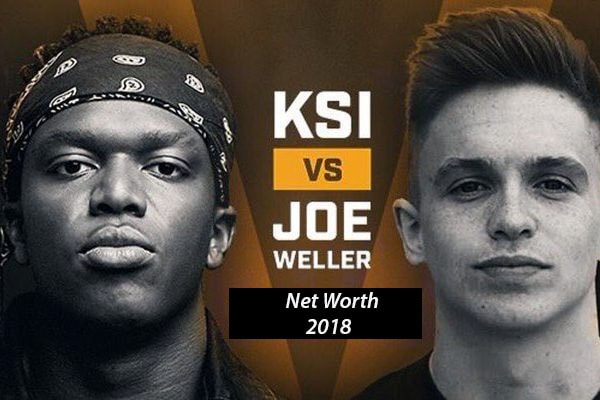 KSI Vs. Joe Weller | Net Worth and Earnings

Both KSI and Joe Weller are some of the top YouTube vloggers. Their primary source of earning which contributes to their million dollar net worth is from their successful YouTube careers.

And since the English YouTuber has been in the scene for quite some time now, it is no surprise that KSI’s net worth is $5 million. Plus he must have bagged a chunk of money after he won the boxing match against Joe Weller. KSI is about to face another YouTuber Jake Paul in a boxing match on the 25th of August, 2018.

Besides that, KSI has his line of clothing too, Side Men Clothing. They sell varieties of products. Here’s a list of products with their respective prices:

All the money he collects from the sales of his merchandise also contributes a substantial amount of money to KSI’s $5 million net worth. With net worth like that KSI surely has a lavish lifestyle.

Joe Weller Net Worth and Earnings

YouTuber Joe Weller has an estimated net worth of $1.5 million. As KSI, Joe’s primary source of income is also from his YouTube career.

The 22-year-old Joe runs two YouTube channels. His main channel, “Joe Weller” which has got over 4.9 million subscribers as of July 2018 generates a noteworthy sum between $31K-$496.3K yearly. Though his second channel may not earn that much, it surely is a plus to Joe Weller’s $1.5 million Net worth.

Joe also has his clothing line, ‘Legitimate.’ Here is a list of Joe Weller’s merchandise alongside their respective price:

With a net worth of $1.5 million, Joe tends to live a luxurious lifestyle.

Here is a brief comparison between KSI and Joe Weller’s net worth.