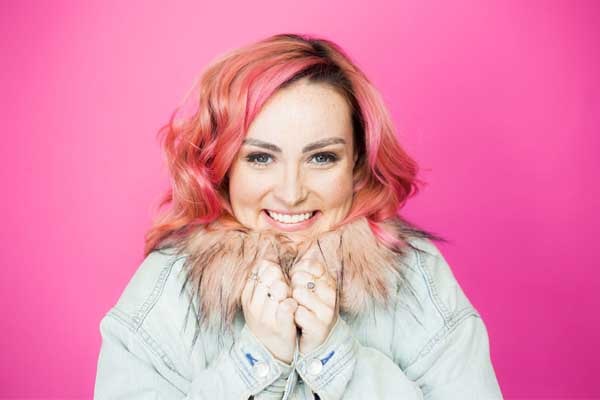 The YouTuber, Molly Burke is in a loving relationship with her mysterious boyfriend. Image Source: Molly's website.

Molly Burke is a sensational YouTuber and a motivational speaker who lost most of her sight at the age of four. She was diagnosed with Retinitis Pigmentosa, but losing her vision at an early age did not stop her. Molly was five when she started public speaking. She is a living example of what one can achieve with hard work.

Molly has proven that with hard work, you can overcome anything in life. Speaking of her YouTube channel, she joined the YouTube community on July 10, 2014. She is also friends with the likes of Casey Neistat, Chris Ulmer, and Bradon Schwarz. Molly has been quite open about her social life, but she has yet to reveal her love life. So, today we will try to solve some puzzles and find out the love interest of the Youtuber Molly.

Molly Burke’s boyfriend remains a mystery. Though Molly’s other-half is a secret, she announced that she has a boyfriend on Twitter and made a YouTube video as well. Molly said how she and her boyfriend have a strong emotional bond with each other. Plus, she frankly revealed that he has a freaking banging body, the best body guy she ever dated.

However, she has not posted any photos of him on her social media handle. Nonetheless, Molly is planning to introduce her boyfriend to the world in August 2020. He is also excited to meet everyone, but he does not work in social media, and it’s just not his kind of life. She is happy that she found all the things such as great fashion, body, and hair that she looked for physically in a partner.

Life is really interesting and funny when you have a bunch of weirdoes messing things around, but at the end are sweet to you. We all call them friends. Molly has lots and lots of good friends, but the one who stands out is Bradon Schwarz. They first met while Molly was visiting Los Angeles.

One thing she liked the most about Bradon when they first met was his confidence. Molly said he walked up to her and said if she needed anything, he is there to help her. Which was a sweet thing to say, moving on, they first had a one on one date while they were hiking. But a rather unexpected turn took place while she was with Bradon.

While they were hiking, Brandon turned to her and said he has something to say to her. Bradon, out of nowhere, pointed out that he was gay. Bradon is Molly Burke’s Gay Boyfriend. She has made a whole video related to this topic. She has included what she likes about him and why he is her soul mate and many more.

Past Dating History And Relationships

She was previously dating Matt; their relationship lasted about two years. Apart from that, Molly was also featured on the Date Takeover, where she let her mother pick her boyfriend. Juan Felipe won the competition and got the opportunity to date, Molly.

The answer to the question, Is Molly Dating Someone? Is yes, as you can tell from the top and seems to be happy with her current relationship with her boyfriend. Besides the rumors she was dating Bradon, we have already made it clear that he is gay and is her best friend but not her boyfriend.

Speaking of her YouTube earnings, Molly makes about $1.2 to $19.9K a month and $14.9K to $238.8K a year, according to Social Blade. Despite being blind most of her life, Molly shows how one can overcome one’s disability with some help from friends, and one’s will power. She has made videos related to many things, but her blogs definitely take the cake.