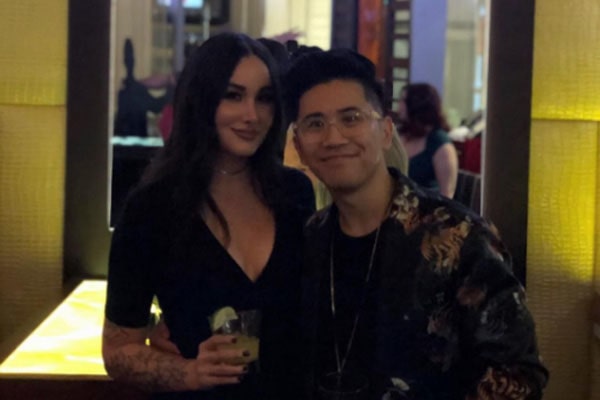 Peter Chao is in a married relationship with his wife, Chelsea McGeachy. Image Source: Facebook.

We are not sure about YouTuber Peter Chao’s girlfriend in real life, but, Linda Dong is his YouTube girlfriend. Far from his girlfriend, Peter Chao has a wife. According to Peter’s many vlogs and posts, the beautiful Chelsea McGeachy is his wife.

Peter Chao is a famous Canadian YouTuber. He is known for uploading entertaining content on portraying Asian stereotypes. His YouTube channel’s name is “Peter Chao” only.

The YouTuber, Peter Chao, was caught up in a controversy in the past. When he uploaded a video mocking African-Americans, his account was suspended for 14 days. Well, let’s come back to the topic and know more about Peter Chao’s wife, Chelsea McGeachy.

According to Peter Chao’s many vlogs and posts on YouTube, he has a wife named Chelsea McGeachy. Peter uploaded a YouTube video, planning for a surprise dinner for Chelsea on their anniversary but doesn’t show the aftermath. He also said that they had been together for seven years and married for four years in 2017. As of 2020, they have been married for over seven years.

In one of Peter Chao’s Instagram post, he revealed the face of his beautiful wife, Chelsea McGeachy. From the caption itself, you can realize how much love Peter has for his wife. A lot of fans were surprised to see Peter Chao’s wife.

Trust us, a lot of fans still can’t get a hold on themselves when they realize Peter Chao has such an amazing looking wife. Going through the comments, we can presume that a lot of people knew about Peter Chao’s dating life.

Before Peter Chao’s wife, Chelsea McGeachy would often be featured in his YouTube vlogs, but for some reason, now she is nowhere to be seen. In one of his videos entitled “VERY INAPPROPRIATE PATDOWN!”, Peter demonstrates a scene with his wife. Because of its sensitivity, YouTube asks people to sign in to confirm their age.

It looks like the marriage between Peter Chao and his wife, Chelsea McGeachy, is still going strong. Their love for each other is as young as it was at the start.

Far Away From The Spotlight

You can rarely see Chelsea on Peter’s social media outlets. Maybe he wants to keep his love life low key and keep his wife, Chelsea, far from the limelight. He rarely posts photos of his gorgeous wife on social media as well.

Plus, the married couple does not seem to have any children as of June 2020. Perhaps they are not ready to become parents right now. Apparently, they are alright with their married life. And when the right time comes, the love birds could plan for their family.

Peter Chao is An Emerging YouTuber

With over 797K subscribers, Peter Chao is an emerging YouTuber. Looking at the way he is pacing, Peter will soon be receiving the YouTube Creator Award after he reaches the milestone of gaining 1 million subscribers.

Therefore, the talented Peter Chao is not far away to get a million subscribers on his YouTube channel. He has succeeded in making a great platform in the YouTube industry for sure.