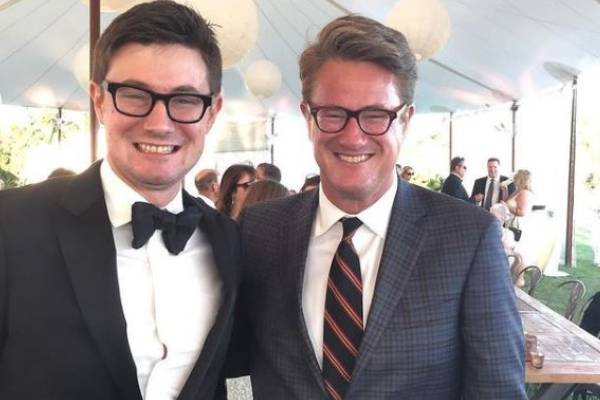 Joey Scarborough is the eldest child of his parents. Image Source: Joe Scarborough

Joe Scarborough is the doting father of four kids, three sons and a daughter. He is a well-known journalist and co-host of the television and morning news show Morning Joe. Scarborough has been married three times in his life and Joey Scarborough is one of his two sons he welcomed with his first wife.

Because of the fame that Joe has gained, several people are curious to learn about his personal life. So here, let’s learn in detail about Joe Scarborough’s son, Joey Scarborough.

Joey Scarborough is the first child of the formerly married pair, Joe Scarborough, and his wife, Melanie Hinton. Together, Melanie and Joe gave birth to their eldest son, Joey, in the late 1980s.

Joey Scarborough’s dad and mom are no longer together. After being married for 13 years, the ex-couple got divorced in 1999. Joey’s mom remarried Peter Haupt, and she now goes by the name Melanie Hinton Haupt.

Moreover, Joey’s father tied the knot twice, first in October 2001, with Susan Waren. They have two kids, Jack Scarborough and Katherine Clark Scarborough. Then, he divorced Susan in January 2013. After that, he began dating Mika Brzezinski and married her.

Joey’s stepmother, Mika, is a doting mom of two daughters, Emilie Hoffer and Carlie Hoffer, whom she shares with her ex-husband Jim Hoffer.

Joey has a great relationship with both of his parents, as well as his siblings.

Joe Scarborough’s eldest child, Joey Scarborough, is a married man and shares a blissful marital life with the love of his life. On June 25, 2016, he exchanged the vows with Catherine Byrnes Grenfell. The Rev. Gary Klingsporn had officiated their wedding ceremony.

The beautiful bride and groom’s friends and family attended the marriage ceremony. Joey and Catherine love each other deeply and might be spending quality time together.

Plus, Joe Scarborough’s wife, Catherine, is a real estate agent with VILLAGE in Nashville, TN.

Joe Scarborough’s son, Joey Scarborough, was interested in journalism from a young age and began writing video game and music reviews for The Florida Sun. It is a local Pensacola-based newspaper launched by his dad. Joey attended the University of Alabama and graduated in the fall of 2011.

After that, Joey began working as NBC News Social Media Editor. Then in late August 2013, he began working as a staff reporter at The New York Daily News. It is unclear if Scarborough is still serving at the Daily News. Nevertheless, we hope he succeeds in his profession and finds fame like his father.

Has Kept His Personal Life Private

As mentioned earlier, Joe Scarborough’s son, Joey Scarborough, has gained immense fame because of the Morning Joe host. However, Scarborough is quiet when it comes to his private life. He has kept his Instagram profile private and has not talked much about his personal life in the media.

Nonetheless, Joey might be living a great life with his family. We hope to learn more about Joe Scarborough’s grown up son, Joey Scarborough, in the coming days.

The name Joey has an English origin, and it means God Will Increase.