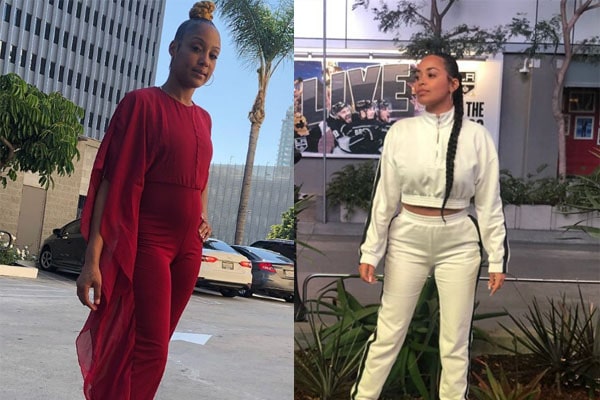 Nipsey Hussle's girlfriends, Tanisha Foster and Lauren London had a feud with each other. Image Source: Instagram.

Ermias Asghedom, known by the stage name, Nipsey Hussle, was an American rapper best known for his mix-tapes like The Marathon, Crenshaw, amongst others. Before being in a relationship with Lauren London, Nipsey dated his ex-girlfriend, Tanisha Foster and they had a kid together named Emani Asghedom.

On the other hand, Lauren London is an American actress and TV personality who has been making big waves in Hollywood off late. Having starred in movies like ATL and 90210, she has gained name and fame in showbiz. Both Nipsey and Lauren also have a son named Kross Asghedom, who was born on Aug 31, 2016.

But it was sad to know that the rapper passed away on Mar 31, 2019, after a shooting near his clothing store in LA. Nipsey’s ex-partners, Tanisha as well as Lauren were in shock after hearing such devastating news. However, Nipsey’s partners don’t get along and also had a feud in the past.

Not A Big Fan Of One Another

Lauren and Tanisha aren’t big fans of each other and that is very evident. After breaking up with Tanisha, Nipsey immediately started dating actress Lauren London. This is supposed to be the start of the bad blood between Lauren and Tanisha.

When the break up occurred between Tanisha and Nipsey, Tanisha reportedly still had feelings for her man and still wanted him in his life. When Nipsey started dating Lauren, Tanisha got very upset, which caused her rivalry with Lauren to intensify, resulting in intense bad blood between the two.

Things Heated To The Next Level Between Nipsey Hussle’s Girlfriends

And then things went to the next level when Tanisha released a tweet in 2014, throwing shade at Lauren and Nipsey’s relationship. She tweeted to Lauren saying that Nipsey said that he still loves her. She threw more shade at Lauren telling her to block her now.

Lauren and Nipsey’s love life had been boosted by the birth of their child Kross Asghedom on 31st August 2016. With the birth of their son, everyone thought both, Lauren and Nipsey were inseparable. But their romantic union came to an end when the rapper shared about splitting up in a tweet in 2017 and would remain close to raise their son, Kross.

When both Tanisha Foster and Lauren London got to know about Nipsey Hussle’s death news, they were in tears and emotional pain. To lose their baby’s father was not easy and was however pretty hard to go through such rough patches of time.

Despite that, we don’t see Tanisha Foster and Lauren London being close to each other. Nipsey Hussle’s baby mamas are far away from each other and taking care of their own child.

Let’s hope the two lovely mothers are enjoying their lives with their respective children and also further let’s hope we get to see Lauren and Tanisha, sharing the same stage someday in the future.