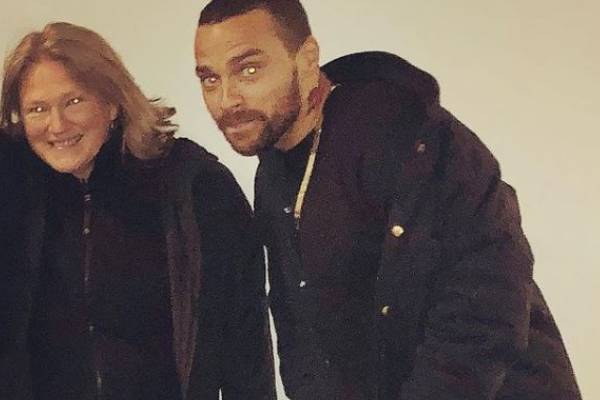 Jesse Williams is one of the three sons of Johanna Chase and her husband, Reginald Williams. Image Source: Jesse Williams Instagram.

Johanna Chase is famous as the handsome actor Jesse Williams‘s mother. Jesse’s parents raised him and his brothers with great love and care. Furthermore, Johanna also must be really proud of her son’s achievements.

For now, let’s learn in detail about Jesse Williams’s mom, Johanna Chase, and her whereabouts.

As mentioned earlier, Johanna Chase came into prominence as Jesse Williams’s dear mother. She shares a blissful marital life with Reginald Williams. They are one of the many examples of interracial couples, as she is Swedish and Johanna’s husband is African American from Georgia. In their marriage, they welcomed three sons, whom they have raised with great love and care.

Johanna Chase’s sons, Jesse Williams, Coire Williams, and Matt Wiliams, grew up having a great time and have a strong bond. And all of them seem to be living a great life.

In one of the interviews, Jesse Williams said that his mother worked as a ceramist and artist. However, after Jessee began his high school journey, she switched her profession from a professional potter to a teacher.

Similarly, during that time, her husband also put himself through Harvard and became a teacher.

One Of Her Son Is A Woodworker

Johanna Chase’s sons seem to be creative as all of them are engaged in the artwork. Her son, Coire, is a woodworker and has been offering stone-making, premier landscaping, woodworking, deck building, and custom furniture services since 2002. He has a company named Lightwell Landscaping and woodwork, which provides several services like interior services, landscape design, and construction.

Furthermore, Coire’s Instagram bio suggests that he is also a firefighter. Nonetheless, he seems to be living a great life with his wife, Khay Muhammad, and two kids.

Her Youngest Son Is An Art Illustrator

Johanna Chase’s youngest child, Matt Williams, is a professional art illustrator based in New York City. His work is specialized in Editorial and Advertising Illustration. Furthermore, Matt owns two surfboards and loves playing soccer. In addition, he worked in fashion for six years as Footwear Designer.

In 2010, Matt graduated from Pratt Institute with a Bachelor of Industrial Design Degree. After that, in 2019, he received his Masters (MFA Illustration as Visual Essay) at The School of Visual Arts. He currently works as an Adjunct Professor at the Maryland Institute College of Art (MICA). There he teaches part-time in the Illustration Department.

Going through Matt’s Instagram, we can see that he has uploaded many of his works. Furthermore, he also has a website where his art pieces can be seen and bought. Johanna’s son seems to be doing really great in his career.

Must Be Proud Of Jesse Williams

Johanna must be really proud of her sons and their works. As many people already know, one of Johanna Chase’s sons, Jesse Williams, is a renowned actor. He has acted in several movies and series in his career. Moreover, he gained huge fame and recognition because of his role as Dr. Jackson Avery in Shonda Rhimes‘ medical drama television series, Grey’s Anatomy.

In his acting career, Johanna Chase’s child, Jesse, has amassed immense fame and tremendous fortune to his name. His multi-million dollar net worth has helped him live a comfortable life. He was married to Aryn Drake-Lee, with whom he filed for divorce in 2017 and which was finalized in 2020. They share two children, Sadie Williams and Maceo Williams, whom they are raising under joint legal and physical custody.

Despite the fame that Jesse Williams’s mother, Johanna Chase, has gained, she seems to be a private person. She has not made any public appearances, but her son posts pictures of hers. She might be doing great for herself and must be living a great life with her children and grandchildren.

Jesse’s mama must be enjoying a content life. Nonetheless, we can hope to know more about Johanna Chase in the future.