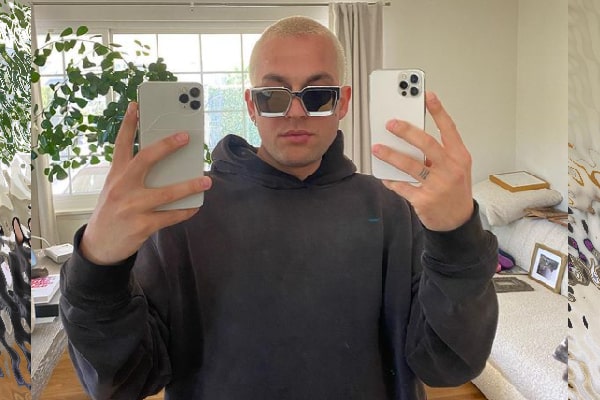 Although Chris Klemens' primary source of income is YouTube, he is also a professional photographer. Image Source: Chris' Instagram.

YouTube is either full of drama or teaches you weird DIYs. However, there are rare “in-betweens,” and Chris Klemens is definitely not the basic channel.

The vlogger, Chris Klemens, has garnered 1.22 million subscribers and has uploaded 400+ videos to date. Furthermore, amidst the cutthroat drama in the YouTube community, Klemens made headlines after Jenna Marbles‘ fans accused him of stealing her ideas.

Anywhoo, despite the backlashes and strict cancel culture of YouTube, Chris Klemens still has one million subscribers. Likewise, the views on his channel have already crossed a hundred million. Therefore, Chris Klemens’ net worth must have skyrocketed, given the views he gains in his channel.

Hence, let’s break down Klemens’ earnings and sources of income from here on.

Also Read: Philip DeFranco Net Worth – Income From His YouTube Channel And Merchandise

Chris Klemens Net Worth And Earnings

Aforementioned, YouTuber Chris Klemens is a notable personality. He has been actively uploading on this social platform for several years and has accumulated one million subscribers to date.

Therefore, it wouldn’t be an exaggeration to say that Chris Klemens’ net worth is significant and primarily depends on his YouTube earnings. Thus, let’s break down his source of profits.

As mentioned earlier, Chris Klemens has been actively uploading videos on his YouTube channel since 2008. His channel is a combination of skits, travel vlogs, interviews, etc.

According to the Social Blade, Chris’s estimated earnings range from $11K to $175.8K per year and $916 – $14.7K per month. However, this value changes as per the views Klemens receives on a daily basis.

Besides Chris Klemens’ earnings from the YouTube channel, his net worth is also boosted by brand endorsements and sponsorships.

Klemens also entertains 403k followers on his Instagram, where he shares most of his pictures. He also uploads a few sponsored posts and might earn a valuable amount to add just another zero to his bank account.

Chris Klemens earns from his YouTube channel and through brand endorsements and has an impressive cash flow from his merch, Middle Kid.

Klemens announced launching his merch in October 2017 and launched in January 2018. The site reveals that Chris Klemens’ merch celebrates individualism, boldness and was inspired by the life of a middle child.

Some of the Middle Child merch available in the online store is listed below with their respective prices.

Therefore, YouTuber Chris Klemens’ earnings are also supported by his merch and his supportive fans. However, Klemens is not just an ordinary YouTuber; he also has a full-blown career as a photographer.

Also Read About Kitboga’s Net Worth and Earnings

As mentioned earlier, Chris Klemen is not just a YouTuber but also has a career as a photographer.

The New York-based photographer started on disposable cameras and took pictures of everything. He later professed that it became serious when his parents bought him a Polaroid One 600 camera.

Chris holds a bachelor’s degree in Photography and has photographed stars like Lady Gaga and Lo Bosworth. Likewise, he has also worked with brands like Yahoo!, Regal Cinemas, L’Oreal, and many more.

Moreover, Chris graduated with Photography and Imaging and minored in media, culture, and communication.

Interestingly, a photographer’s average salary is $66,472 per year, which might rise to $75,547. Since the salary range can vary depending on the additional skill and educational background, Chris Klemens’ earning as a photographer could be substantial.

Hence, Klemens’ net worth must be proliferating along with his career span, skills, and accumulating a considerable number of subscribers. Therefore, Chris’s lifestyle is pretty luxurious, thanks to his lucrative income from various professions.

Hopefully, Chris Klemens discloses his actual net worth in the coming days. Until then, let’s hope he gains more prominent clients and a higher number of subscribers.