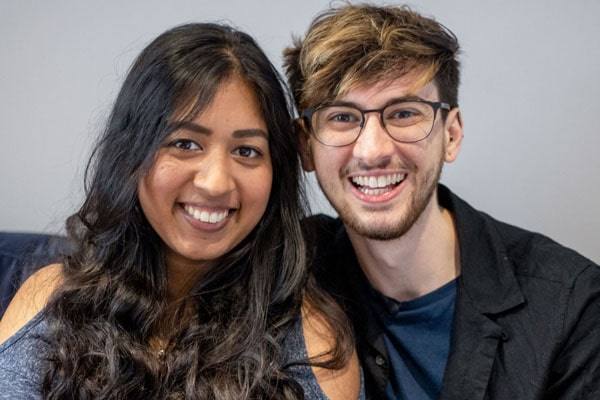 From being a socially undefined person to a confident man, YouTuber Jammidodger has been on the platform for more than eight years now. Jammidodger has gathered around 355K subscribers over the years and accumulated 38.7M views as well. With such a wonderful growing audience worldwide, Jammidodger a.k.a. Jamie Raines has been in love with his soulmate, Shaaba Lotun, for years now.

And Jammidodger’s girlfriend Shaaba is always claiming to be his number one fan. Let’s know more about their sweet love transition from being best friends to couples.

How Did They Meet?

The lovely couple, Jamie Raines and Shaaba Lotun met back in their art class in college. Talking about the first impression they had of each other, it is revealed in Jamie’s channel that Shaaba didn’t like Jamie at all, and Jamie thought Shaaba knew how to draw and was beautiful. As it was before the transition, Jamie was a girl and became best friends with Shaaba after a few interactions.  When Jamie decided to come out as a Transgender, Shaaba was supportive of Jamie and became even good friends with him.

It was when Jamie confessed his love for Shaaba, everything changed. Shaaba avoided Jamie for a while, but after talking and finding out resolves, they started going out and have been together for more than eight years now since getting engaged back in 2017.

Jammiedodger’s girlfriend Shaaba Lotun belongs ta a very strict household and was not allowed to talk to boys and be friends with them while growing up. This is why the friendship of Jamie and Shaaba was in a major dilemma when Jamie was in the transition period. It was, even more, worse when Shaaba’s mother found out that Shaaba and trans Jamie were in a romantic relationship. They were not accepted by Shaaba’s family side, but they never left each other’s side. Looking at their love and support for each other, Shaaba’s mother finally accepted them, and they engaged with everyone’s support and acceptance.

The engaged couple radiates so much love and positive energy that makes everyone believe that love does exist. Jammidodger’s soon-to-be wife Shaaba has her YouTube channel, where she posts many vlogs with Jamie alongside.

The power couple, Jamie and Shaaba, are the reminiscence of true love. They are always together, whether they are supporting, cheering for one another, or creating with each other. The beautiful couples are the co-founders of True To Me, a brand for the LGBT+ community. Jamie has released several merchandises collaborating with the company.

Jammidodger has revealed that he is set to marry the love of his life, Shaaba Lotun, and plans to get children too. We hope they will be blessed with great fortunate life and abundance of happiness.