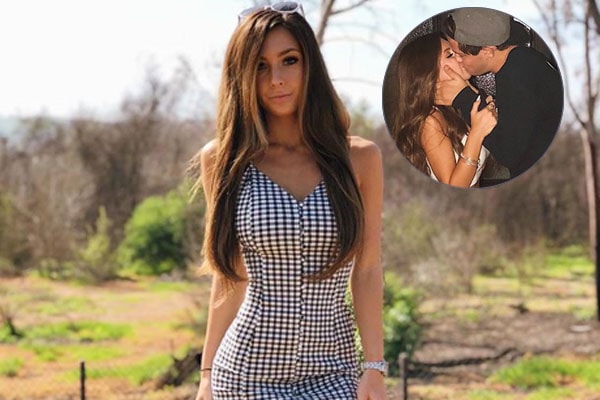 The YouTuber, Taylor Alesia seems to be in a relationship with handsome, Matt Freeman. Image Source: Pinterest.

Sorry folks, but the YouTube hottie, Taylor Alesia is probably taken. Taylor Alesia seems in a relationship with a guy named Matt Freeman. She posted a romantic photo of kissing her boyfriend, Matt on her Instagram. Or maybe she just wanted others to know that she is no longer available.

Taylor Alesia is famous for her YouTube vlogs. Thanks to her YouTube channel she has amassed an estimated net worth of $1 million. Before Matt, Taylor had dated many boyfriends. So, let’s get to know more about Taylor Alesia’s lists of boyfriends and her love life.

Taylor Alesia’s boyfriend, Matt Freeman is also famous on Instagram. As of September 2018, he had over 16.1K followers there. It may be less in comparison to Alesia’s 2.2 million followers, but nevertheless, it is a great thing. This lets us know that he is quite famous. But for some reason, Matt had kept his Instagram profile private.

Before being in a relationship with her boyfriend Matt, Alesia had dated many boyfriends in the past. She was together with her ex-boyfriend Tanner Fox.

Tanner is also a fellow YouTuber.The two had been featured in many videos together. But alas, things didn’t work out for them. Tanner posted a video on his YouTube channel announcing that he and Taylor Alesia broke up.

We can get the idea that even after breaking up, Taylor Aleisa is on good terms with her ex-boyfriend, Tanner. There was also a rumor that Taylor Alesia was dating fellow YouTuber Taylor Caniff. Though Alesia found someone but Taylor Caniff is bored without a girlfriend and is in search of a wife to love.

Having plenty of boyfriends in the past, it looks as if Taylor is now keeping her relationship with her boyfriend, Matt Freeman secret. She had only uploaded the photos of them lip-locking in the past and has not uploaded any pictures of Matt. Although her Instagram is filled with her hot pictures.

Since Taylor has been super low-key about her love life, it’s hard to tell whether she is in a loving relationship with Matt. As she has removed the kissing photo from her Instagram, it could also be that the two might have broken up.

But as it turns out, Taylor Aleisa likes to keep her love life very private. Nonetheless, gorgeous Taylor seems to be happy with how her life has been going so far.