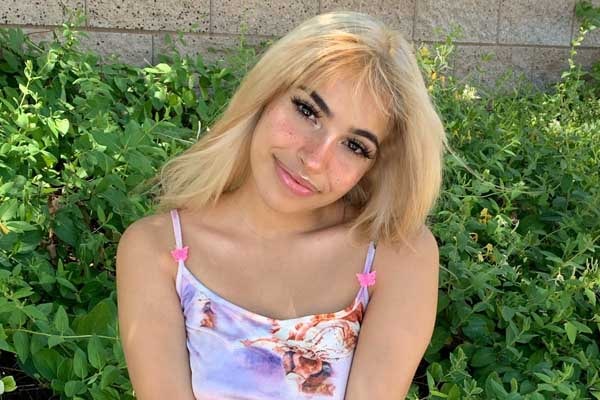 The gorgeous YouTuber, Vereena Sayed is very single right now and is not in any kind of relationship. Image Source: Vereena's Twitter.

Vereena Sayed, aka Vereenasayed, is a gorgeous Youtuber best known for her personal blogging. She joined the YouTube clan on May 28th, 2012. From the moment she uploaded her first video on YouTube, Vereena has been able to catch the eyes of her viewers.

Vereena is not only famous for her blogging but also for her makeup tutorials and her big talks. Well, she talks a lot and her contents are rather interesting. She often gives a glimpse of her personal life but never her love life. So, curiosity has generated a question among her fans, whether she is dating someone or not?

Well, that’s a really complicated question to answer. Vereena once tweeted that she was going to make a video with her beloved partner. Later on, it turned out to be a spam that Vereena herself accepted. She was talking about her best friend, Billy.

She made a video with him, at first she introduced him as her boyfriend but later confirmed that he was merely a friend. We know you must be thinking, ‘why her best friend can’t be her love interest?’ To put it frankly, Billy happens to be more interested in boys rather than girls as he is gay.

Apart from that, Vereena has never openly spoken about her current relationship status on Youtube. The video that she uploaded addressing Billy as her boyfriend got more than 1.4 million views. We can say her fans are really interested in her relationship status. So, let’s know who she is actually dating or was dating.

Who Was Vereena Actually Dating?

Speaking of Vereena’s love interest, she was previously dating Anthony Reeves. The couple started dating in 2019. However, the pair is no longer together as they separated in January of 2020. Before they parted their way, Vereena had addressed countless times that she genuinely loves him. She still says that she loves him, but for the time being is doing what’s best for both of them.

Talking about Vereena and Anthony’s current relationship status, the ex-pair has parted their ways. Vereena tweeted mentioning the love between them is not dead, and they are doing something beneficial for their relationship.

Furthermore, Vereena Sayed’s ex-boyfriend Anthony Reeves is really charming, and we can see why they were together. Her fans who didn’t know him loved to call him a dimple boy. Well, we can see where the name came from. In fact, his dimple is quite famous in tik tok too.

We all known Vereena is a popular YouTuber with more than a million subscribers and over 57 million-plus views on her Youtube channel. Speaking of her earning, it’s probably her YouTube channel as she earns nearly $348 to $5.6K a month and $4.2K to $66.7K a year, according to SocialBlade.

Well, she perhaps earns a hefty load of cash from her YouTube channel, but that’s not only her source of earnings. She also draws from her sponsors and merchandise.

Vereena Sayed’s ex-boyfriend, Anthony Reeves, loves playing wizard 101, which she addressed when she gifted him a Mac pro. He seemed very happy and was shy a bit too when Vereena surprised him with her gift.

Now since they moved on, her fans are quite upset regarding her decision, we can only hope everything goes out smoothly between them.