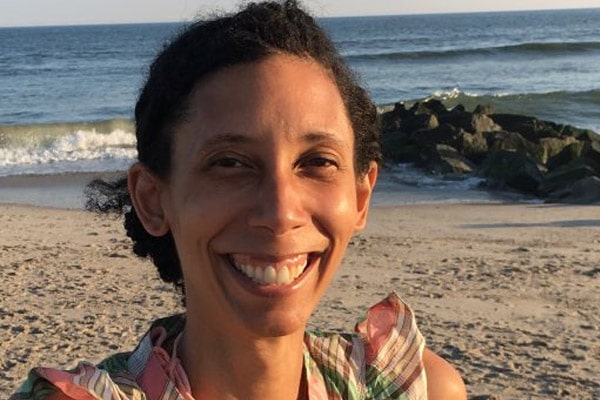 Kareem Abdul-Jabbar’s daughter, Habiba Abdul-Jabbar, aka Habiba Alcindor, is one of the oldest among Kareem’s children. Currently, she is working as a Development Associate at The Floating Hospital since 2019.

Keep reading to know more about this beautiful daughter of Kareem Abdul-Jabbar’s, including her facts and many more in detail.

Islamic religion follower Kareem Abdul-Jabbar’s daughter, Habiba, was born in the District of Columbia on 15th May 1972 as the first child of her parents. Like all the other insular community’s kids, Habiba attended home school. Along with it, she also practiced Islam, including dressing traditional Muslim attire.

Habiba Alcindor’s childhood was a bit full of family dramas. Her father, Kareem, told her mother Habiba Sr. his wish for a divorce when she was just six years old in 1978. Upon the insistence of Kareem, her parents dissolved their marriage through a religious ceremony. Habiba stayed far from her dad after that with her mother. The official separation of Habiba’s mom and dad only got finalized in March 1983, five years after the religious divorce ceremony.

The gorgeous and talented daughter of Kareem, Habiba, graduated from her high school in 1989, the year when her father Kareem retired from sports. She got honored with a writing award during her graduation. Later, she entered the University of California for her further studies. In 1995, Kareem’s little girl left Los Angeles to join Oberlin College. There, she completed her degree in Creative Writing in 1997.

During the college days, Habiba earned as a waitress, a housekeeper, and a cashier to support herself while there. After graduating at the age of twenty-five, she shifted to New York City to flourish in her career.

Career In The Entertainment Industry

Kareem Abdul-Jabbar’s daughter Habiba Alcindor began her career in the entertainment industry in January 1997 as a Script Reader in The Wilma Theater. She worked there till January 2000. After that, she worked in The Nation Institute from 2002 to 2003, where she coordinated the production and marketing of Radio Nation. Later, from 2003 to 2012, Habiba was the communications coordinator in The Nation Magazine.

After working in The Nation, Habiba served as a Media Specialist in FEMA from 2013 to 2017. The skilled princess of Kareem is working as Development Associate on Ryan Health since 2017 and in The Floating Hospital since 2019 to present. Moreover, she is also a Journalist and writes for various famous online newspapers like The Huffington Post and The New York Times.

Furthermore, Habiba is the director and screenwriter of a dramatic series loosely based on the Los Angeles Lakers ‘Gold Rush‘. The producer of the drama series is none other than Victorious DeCosta. She created the dramatic sequence to fuse her experience in journalism with her interest in creative writing.

At the September 22nd Los Angeles premiere of the Gold Rush dream sequence with my dad, @kaj33. Hair by thehairmaster. @ Wilfandel Club https://t.co/FxtuZPWg9R

While Habiba gets free time from her work, she volunteers at Paper Tiger, a radical media collaborative. Habiba is also a board member of the Sports Fan Coalition, which lobbies for the rights of players and fans of all sports.

While Habiba has found immense success in her career, her half-brother Adam got into the wrong side of the law. He was arrested for attacking his neighbor during an argument and was sentenced to 180 days in jail for his crime.

Alcindor often posts her photos on her social accounts along with her mom Habiba and siblings. Her pictures depict that she is very close with her siblings and especially her dear mom.

Habiba is an Arabic origin name, which means “beloved.”