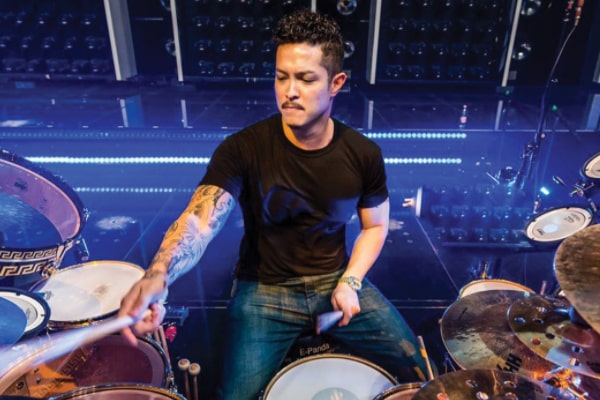 Eric Hernandez, a.k.a E-Panda, is one of the most skillful and talented modern drummers who also is the older brother of pop sensation; Bruno Mars. Not only known for being the 11 times Grammy Winner’s brother, the 44-year-old has also contributed majorly to the drumming industry.

From humble beginnings to collaborating with major artists, let us look into five interesting facts about Eric Hernandez regarding his life.

Born in Brooklyn and raised in Hawaii, Eric Hernandez began drumming at the tender age of four. Playing professionally at the age of ten alongside his father Peter Hernandez, who was the percussionist for Cecilio & Kapono and Love & Money.

E-Panda covered music from the ’70s, ’60s, and ’50s for “The Lovenote Show.” Playing 6 nights a week for 8 years straight made the young talent in demand. The consistent routine might have affected his schooling life, but it improved his skills drastically.

The Hawaiian native was “too cool for school” and has mastered styles like reggae, rock, funk, and soul. Eric became well known in the music circuit and would gain notoriety for his talent, becoming Hawaii’s most sought-after drummer.

The drummer would move to Hollywood, California, and join the Alternative-Pop band “Louis Says” in 1995 as their tour drummer. He was left jobless and had no contacts after his contract ended. Bruno Mars’ brother would start looking for jobs isolating himself from drumming.

The artist would serve 10 years in the LAPD whilst sticking to his talents, eventually having his big break in the later years.

The Hernandez household was highly inspired by dance & music. The family heads; Peter Hernandez was a percussionist, and his wife Bernadette San Pedro Bayot, a hula dancer.

The pair welcomed not only two sons but also are the parents to Presley Hernandez, Tiara Hernandez, Tahiti Hernandez, and Jaime Kailani.

Stars of the TV reality show called “The Lylas,” which aired in 2013, all of Eric’s sisters are talented singers. The show is about the lady group leaving their homes to pursue their music careers.

The Hawaiian Native Has Collaborated With Many Artists

Eric Hernandez might have featured with his brother, Bruno Mars, in a couple of his songs but has been a core part of other talented music artists. “Billionaire” and “Nothing On You” are some of the hit songs the Hernandez brothers have collaborated on.

Although mostly called for tours and live performances, the father of three is responsible for creating more engaging drum beats. Due to which he has been featured with a lot of talents.

E-Panda’s Net Worth And Some Of Its Sources

Much of Eric Hernandez’s net worth is from his drumming and tours. Aside from that, the former police officer also has his own ventures. Well, Eric might not be as rich as his brother Bruno, who has a net worth of $175 million. But one thing is for sure that the talented drummer has got a substantial amount of fortune.

Eric Hernandez is also endorsed by some major drumming institutions like DW Drums, Vic Firth Sticks, Sabian Cymbals, and Remo Drum Heads. He also has his own signature drum snare made from European maple with a price tag of $400.

PANDA SERVICE ANNOUNCEMENT 🐼 For those who already got your hands on my signature snare- THANK YOU! I hope you love it. I know there’s a bunch of people still waiting for yours, and I… https://t.co/A9fBhZ8puT

The modern drummer also has his own signature headset with Razor, which is priced at $150. And looking at Eric’s popularity, one can expect him to earn quite a lot from his side ventures.

Loyal Husband And A Father Of Three

Looking into his social feeds, we can see Cindia’s husband enjoys spending time with his family. Eric Hernandez is a perfect example of a celebrity who shares time equally in professional and personal life.

Eric Hernandez, so far, has had a wonderful career by performing and helping out various artists. We wish the best to the father of three for his upcoming projects and to live happily in life.