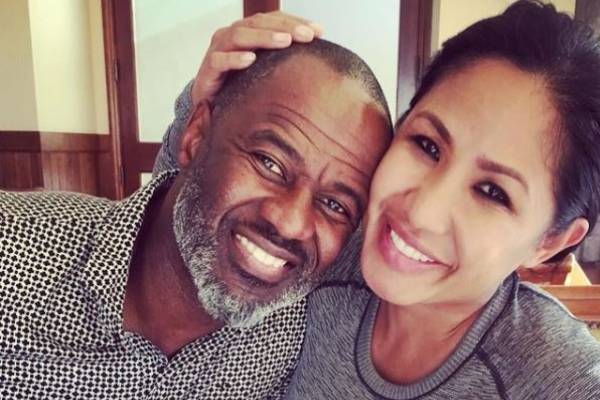 Brian McKnight is a well-known American singer, songwriter, record producer, and actor. He has been involved in the entertainment business since the late 1980s and has garnered massive fame from it. McKnight has received 16 Grammy Awards nominations to date for his works. He is also a multi-instrumentalist and has mastered the piano, guitar, trumpet, tuba, percussion, among others.

Apart from his music and acting career, Brian has also been in the limelight due to his personal life. He has been married twice and is a father of four.

Brian McKnight met the love of his life, Leilani Malia Mendoza, in 2012 and started dating soon after. The pair first met at a fitness convention in Los Angeles where McKnight had invested in a fitness product. On the other hand, Mendoza was a Hawaiian Tropic model signing autographs there.

According to the singer-songwriter, it was love at first sight for him. He said that Leilani was the most beautiful woman he had ever seen in his life. Brian McKnight has also revealed that he had not known what love was like before meeting his then-girlfriend. Thankfully, he got to experience love with Leilani and is now basking in their togetherness.

After being in a love-filled relationship for few years, Brian McKnight proposed to his lover in May 2017. Leilani Malia Mendoza obviously said “Yes,” and McKnight announced their engagement via his Instagram. Brian shared a black and white photo of the pair where Mendoza’s beautiful ring was in the forefront. He also had beautiful words for his future bride and revealed that he waited for 42 years to find the love of his life.

The year 2017 was filled with happiness for the McKnight couple. At the end of the year, they got married in a beautiful ceremony surrounded by their loved ones. Their new year’s eve wedding was a gorgeous affair, but the pair only announced their marriage on January 1, 2018. Both Brian and his wife, Leilani, took to their respective Instagram and shared pictures of their ceremony.

Brian McKnight’s wife, Leilani Malia Mendoza, looked beautiful wearing a sheer gown covered with 50,000 Swarovski crystals. The Back at One singer gushed about his spouse’s look sharing a video of the stunning wedding dress. He continued to post pictures of his wedding throughout the month, giving his fans a look at his dream wedding.

While the pair celebrated their love with their dream wedding, this was a second marriage for Brian McKnight. Leilani Malia Mendoza’s husband, Brian, was previously married to his college sweetheart, Julie McKnight. The former couple exchanged vows in 1990 and were together for more than a decade. However, they got divorced in 2003, but Julie kept her ex-husband’s surname.

Moreover, Brian McKnight’s ex-wife, Julie McKnight, is also the mother of his two sons. In their decade-long marriage, they had two children, Brian McKnight Jr., and Niko McKnight. The boys are all grown up now, but in 2019, McKnight Jr. accused his father of abandoning him and his siblings.

Leilani Malia Mendoza Is A Mother Of Two

Just like the Grammy-nominated artist, Leilani Malia Mendoza has also welcomed children from a previous relationship. Brian McKnight’s spouse is a mother of two, son Jack McPhee and a daughter, Julia McPhee. Mendoza’s daughter is currently attending the University of California, Santa Barbara. Her son, on the other hand, graduated from high school in 2021.

Both of Leilani Malia Mendoza’s children share a close bond with her husband. Brian helped raise the McPhee siblings and does not hesitate to showcase his love for them. The brother-sister duo seems to be happy about their mother’s relationship with the singer-cum-actor.

Furthermore, Leilani is also a stepmother to Brian McKnight’s children from his previous relationships. Along with his two sons from his first marriage, Brian is also a father to Briana McKnight and Clyde McKnight. His eldest son, Brian McKnight Jr., has also mentioned a younger sister, but it is unclear if she is the R&B artist’s daughter.

Unlike her husband’s bond with her children, Leilani Malia Mendoza’s relationship with her stepchildren is not known yet. Her eldest stepson had claimed that Brian abandoned his children. The multi-instrumentalist has spoken out against the accusations and revealed that his ex-wife and children didn’t want him in their lives. Whatever might be the reason behind their animosity, let’s hope they solve it, and we get to see the blended family in the future.

Is Involved In The Medical Field

Brian McKnight’s wife, Leilani Malia Mendoza, is a Filipina-American whose family is from Plaridel, Bulacan. And like many other Filipina-Americans, Mendoza is also involved in the medical field. However, she is not a nurse like several people previously thought after seeing her in scrubs. Rather, Leilani is a pediatric neurophysiologist working at UCLA, according to her LinkedIn. She and her team reportedly work with children suffering from brain anomalies.

In May 2019, Brian debunked the rumors about his wife’s career in an Instagram post. He also revealed that Leilani went back to school after giving birth to her children. And after 12 years of hard work, Mrs. Leilani McKnight has made her dream a reality. She is now serving those in need and also enjoying her life with her husband.

The lovebirds have enjoyed many years of togetherness and are now living their best life. Also, Brian McKnight’s muse, Leilani Malia Mendoza, is finding great success in her career. We wish the pair all the best for their future and hope that they are together for eternity.