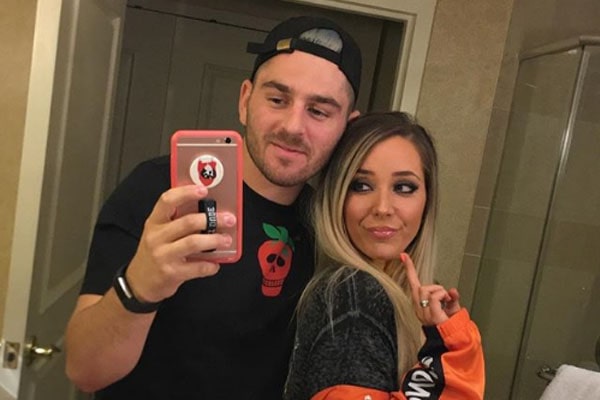 Jenna Marbles' boyfriend is Julien Solomita and the two are so in love with each other. Image Source: jennamarbles/Instagram.

The American YouTuber and social media personality, Jenna Marbles, has accomplished quite a lot from her YouTube career. With over 20.1 million subscribers on her channel and a staggering net worth of $8 million.

She has had a successful career and is the first social media personality to have a wax figure displayed in the iconic Madame Tussauds Museum. As far as her personal life goes, she is in a serious relationship with her fellow YouTuber, Julien Solomita. He also an accomplished YouTuber who runs the channel of his name, and it has over 2.45 million subscribers.

These two YouTubers regularly appear in each other’s videos, and their deep love is clearly visible for all to see. But it seems the two will not be together anytime soon as Jenna has a unique perspective towards marriage, stating that she wants to have a long-term relationship with her boyfriend before eventually getting married years down the line.

Jenna and Jenna have been in a relationship since 2014. The two started dating way back in 2014 after Jenna broke up with her previous boyfriend, whose name was Max. Since then, the two have been together ever since, and it seems that’ll be the case for a long time to come.

Jenna revealed that Julien is her boyfriend in her video titled “Questions #5”. Julien was Jenna had been friends for a long time, and he had appeared in her videos a few times. Since then, the two have been together and continuously appear in each other’s videos and also host a weekly podcast.

Julien and Jenna have moved in together and are having a lovely life. Both of them love having pets, especially dogs. Jenna has as many as three dogs while includes a male chihuahua named Marbles and an Italian greyhound called Kermit. Julien also has an Italian greyhound named Peach. The couple also owns a pet hamster named Ad.

Jenna and Julien’s love for each other is still as young as it was at the beginning. The two lovers always share their adorable couple photos on their social media handles. It’s like they are so perfect for each other.

While Jenna and Julien are in a serious relationship, it doesn’t seem that they like they will get married anytime soon. It is due to Jenna’s views on marriage. In one of her videos, she stated that she doesn’t like people getting married early. According to her, two people should only get married after being in a relationship for many years.

Jenna further said that she doesn’t like people spending a lot of money on their wedding, stating that she believes people should utilize that money in having a stable life. Furthermore, she said that she completely supports gay marriage as well.

Well, the fans must be desperately waiting to see the love birds getting married soon. Since it has been over six years since the two started to date each other, we may see Jenna and Julien’s wedding over the years.