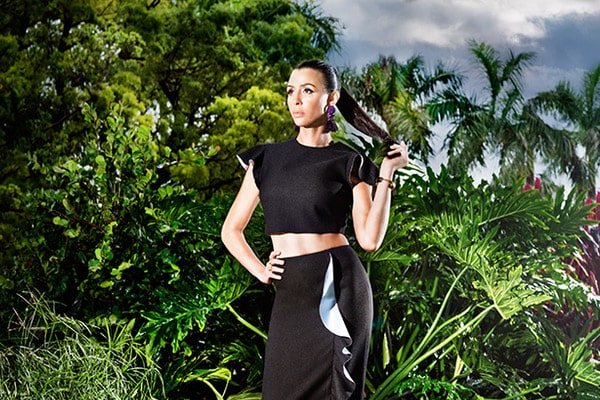 Born on 3 September 1971, Drena is the biological daughter of Diahnne Abbott. She took the last name De Niro only when her mother married Robert De Niro in 1976, and he adopted her. Here are more facts you should be informed about Robert De Niro’s daughter, Drena De Niro.

Drena De Niro Is A Mother Of One

The beautiful daughter of Robert and Diahnne, Drena, is the mother of her teenage son Leandro De Niro Rodriguez. Leandro, who Drena lovingly refers to as ‘Leo Rock’ on social media, was born in 2005. It made Robert De Niro, a proud grandpa for the first time.

The loving mother Drena shares photos of her rocking son often on her Instagram page. You might not be amazed to hear that Leandro has starred in the movie ‘A Star Is Born‘ alongside his momma Drena in 2018. Leo, too has got acting skills from his granddad Robert same as his mom. Also, Leo is famous for his roles in the movies ‘The Collection‘ and ‘Cabaret Maxime.’

According to Whosdatedwho, the American actress, as well as a filmmaker, Drena De Niro, is possibly single. But, it looks like she was in a romantic relationship in the past with the New York-based artist Carlos Mare aka Carlos Rodriguez. He is the father of Drena’s son Leandro.

Both Carlos and Drena have never opened up about their love-life, but their son Leo is the proof that they were or probably still in a relationship. Drena’s likely partner Carlos also posts photos with Leandro frequently on his social pages including Instagram and Facebook. Moreover, Drena tags Carlos every so often while posting pictures of their son Leandro.

Her Dad Bought Her A $2.85 Million Manhattan Penthouse Apartment

Robert De Niro never feels shy to brag about his kids. Some years ago, he showed his close father-daughter relationship with Drena by buying her a Penthouse Apartment in New York City. Such substantial financial support of Drena’s father Robert is the evidence of how much he cares for his daughter and grandson’s happiness.

In 2014, Robert De Niro purchased the apartment in New York City for the ease of Drena and Leandro. The two-bedroom, two-bathroom penthouse in the West Village cost $2.85 million. It’s scenarios overlook Manhattan and the Hudson River.

Before her debut in the American Film Industry, Drena De Niro established herself in the fashion industry as a model and a fashion consultant. Her highest-profile client includes Giorgio Armani, Emporio Armani, for which she worked as a model and Music Design Consultant. Such a keen interest in music along with modeling assisted Drena in being a DJ too.

Furthermore, Drena serves as one of the spokespeople for the non-profit organization called Kageno Worldwide, Inc since 2006. This organization helps impoverished communities succeed by implementing self-sustaining programs within them.

The oldest daughter of Robert De Niro, Drena, is following the foot trails of her legendary dad in acting and film making. Although she has not genes of Robert, she has acquired the skills of acting from him. Today Drena is one of the successful actresses and filmmakers. And the credit goes to her years-long career in television perfromances, including Mozart in the Jungle, When They See Us, and Boardwalk Empire.

Skilled Drena has appeared in several projects of her dad, such as ‘The Intern’ and ‘New Year’s Eve.’ Furthermore, the 2001 short film documentary ‘Girls and Dolls’ produced and directed by Drena won her a medal at the New York Independent Film. Also, Drena received the Best Directorial Debut in Documentary award and Video Festival that year.

Drena De Niro’s latest project, a dramatic comedy ‘Love & Orgasms‘, is on the way. She has the role of Betsy Vandercliff in the drama. It’s planned to come out some time in 2020.

Similarly, Drena’s other siblings are Julian De Niro and Aaron Kendrik De Niro from her father’s relationship with model Toukie Smith. In the same way, Drena is the oldest sister of Elliot De Niro and Helen De Niro from Robert’s marriage with Grace Tower.

Drena is a Greek name, which means “Manly or Virile.”