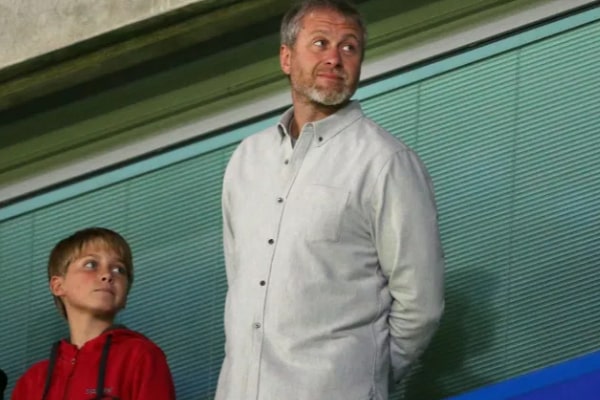 Ilya Abramovich is Roman Abramovich’s fourth child and his second son. Before the coronavirus pandemic, the 18-year-old was enjoying his high school. Ilya is more close to his mother, Irina Vyacheslavovna Malandina, a former Aeroflot Stewardess.

Despite being in his late teenage years, Roman Abramovich’s son has a very private personality. There are minimal details regarding his lifestyle, so much so you can hardly find pictures of him. But we have put together a few tidbits about Roman Abramovich’s son, Ilya Abramovich, so, without any further ado, let’s dive into it.

As mentioned above, Ilya’s parents are Roman Abramovich and Irina Malandina, who legally divorced in 2007. Aside from Ilya, the former husband & wife have four other children.

The reason why the Chelsea FC owner divorced his partner remains undisclosed to this day. The mother of five was more broken when Roman Abramovich married Rusian-American businesswoman Darya “Dasha” Alexandrovna Zhukova after only a year after their separation.

The Russian-Israeli billionaire has never had a stable love life since he has married thrice and has seven children so far. Although Ilya’s mother was once considered the most powerful blonde, she has changed the overall aspect of her life and has become more religious.

The aftermath of the 18-year-old’s parents’ separation saw Irina winning their children custody. Though the former couples are separated, they have never said anything bad about each other, and many consider it as an ideal divorce. The Millhouse LLC’s owner also unites with his ex-wife to teach their children the importance of hard work and discipline.

Surrounded By Six Other Siblings

Roman Abramovich’s son Ilya Abramovich might be the youngest child of him and Irina Malandina, but not the youngest of his bloodline. The teenager’s other siblings are Anna Abramovich, a Columbia University graduate in philosophy, and Arkadiy Abramovich, the founder of ARA capital. Ilya’s two other sisters, i.e., Sofia Abramovich and Arina Abramovich, are professional horseback riders and have taken part in multiple equestrian events.

Arkadiy Abramovich, the first son of the billionaire, is most likely to be the heir to his “Roman Empire.” But who knows, Ilya might take over his father’s businesses in the coming days.

The Youngest Son Of Irina Malandina

As talked about earlier, Ilya Abramovich is the youngest of Roman Abramovich and Irina Malandina. The privileged child was born sometime around 2003 and is looked after by all his siblings, mostly his sisters.

Unlike his elder brother, Arkadiy Abramovich, who became successful early in his career, Ilya has other interests rather than continuing the family business. Guided and influenced mostly by his former Aeroflot Stewardess mother, the brother of six has successfully lived a low-key life by not taking advantage of his father’s fortunes.

Roman Abramovich Wanted Him To Study At Eton

Roman Abramovich is a billionaire who is not afraid to splash the cash and a good father. The 54-year-old has never asked much from his children, rather spoiling them with his riches. With Ilya, his father wanted his second son to join the prestigious and costly Eton High School.

The secondary school in Bury, England has outstanding features and excellent performance. The Chelsea FC owner’s dream of wanting his son to attend the school never materialized. Rather Ilya Abramovich would continue his education in a London-based school.

Ilya Abramovich is expected to join a reputable college like his other siblings for his university and further studies.

Okay With No Mainstream Attention

The only time Roman Abramovich’s kid Ilya made a headline might be during his birth. Apart from that, the youngest child of Roman and Irina has never had attention surrounding him as he is very discreet about his life and movements.

The brother of six is not active on any social media platform, and there are hardly any pictures of him on the internet. Unlike his siblings, who often make it in the news, Ilya has remained very private regarding his entire life. We do not know whether he shares similar interests with his billionaire father, but what we do know is he is ok with how things are. He is yet to choose any career path, but whatever his choice might be, his dad will surely support him wholeheartedly.

Roman Abramovich may have faced backlash with the recent Europe Super League drama but has always provided for his children. His second son Ilya Abramovich is in his twilight years as a teenager but surely is an interesting character. He is living a luxurious lifestyle and in May 2022, he was spotted in an Austin-Healey 3000.

Well, even though Ilya is okay with not being the center of attention, the Abramovich family has come into the limelight amid the Russia-Ukraine crisis. Many have asked Ilya’s billionaire father to hand over the control of Chelsea but Roman apparently transferred stewardship and care of the club to its charity organizations.

Nevertheless, we wish the best to Ilya Abramovich regarding his future and continue to live happily like he is right now.

Primarily used as a boy name, Ilya is of Russian origin with the meaning “Strength of God.”